A unique SVD path: Parish Ministry in the United States

Life as a Divine Word Missionary requires a certain sense of adventure. The idea of traveling the world and serving people in other cultures is a large part of what draws most seminarians to the community in the first place.

That was certainly the case for Fr. Gus Wall, SVD, who first recognized his call to vocation when he was a young boy after a missionary visited his family’s parish. Later, he went on to pursue religious life, taking vows first as a Divine Word brother and later as a Divine Word priest.

“It was just the idea of going anywhere I was needed in the world,” he reflects. “Meeting and ministering to people from other countries just really intrigued me.”

But sometimes God has His own plans for us.

With the exception of one assignment in Kenya during the early 1990s, Fr. Gus has spent his entire career working at parishes or schools in the United States.

While it is not as exotic as some other SVD missions, Fr. Gus says it is equally as important and fulfilling.

For six years, he served as the National Vocation Director, working out of Divine Word College in Iowa. Since then, he has served as a parish priest at several churches in the South.

“One of the reasons we’re involved in the southern United States is because the African American Catholic community wasn’t being ministered to efficiently,” he said. 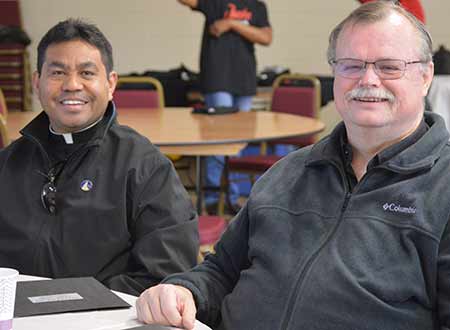 Since the early 1900s, the SVD sought to evangelize among the black community. In 1923, the Society established the first U.S. seminary for African American men in Bay St. Louis, Miss.

In 1934, the SVD ordained the first four African American priests to complete their entire formation at a U.S. seminary. Fathers Anthony Bourges, Maurice Rousseve, Vincent Smith and Francis Wade were assigned to the newly formed Immaculate Heart of Mary Church in Lafayette, La. where they worked together to establish and cultivate a sense of community. Today, Fr. Gus serves as the parish priest at that same church, working daily with the congregation that the “First Four” formed.

“I myself am Caucasian, so learning, experiencing, serving and being enriched by the African American community has deeply affected me and I think they made me the religious I am today,” he said. 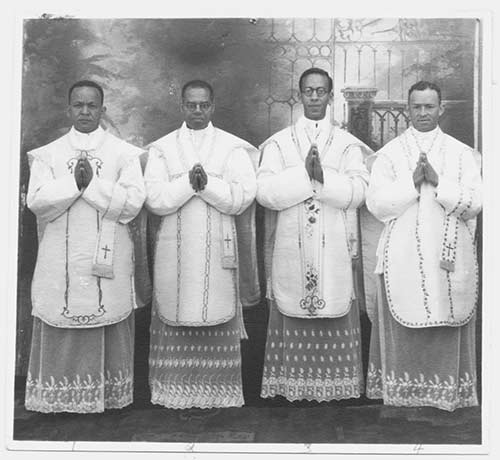 About 2,000 families belong to the thriving Immaculate Heart of Mary parish, which keeps Fr. Gus very busy. It’s a church that is rich in SVD history and he says he’s honored to be a part of its legacy. In the entryway of the building hangs a plaque that pays tribute to the First Four.

Fr. Gus said it’s important to have SVD parishes throughout the United States because they’re able to reach areas and groups of people that are often otherwise overlooked. It’s also an opportunity to promote vocation ministry and share the SVD mission.

Despite traveling to fewer countries than he anticipated when he first sought life as a religious missionary, Fr. Gus said he feels that he is exactly where he belongs.

“To reach out to other cultures, to take the lead from them, to listen to where they want to go and to support them and build up the communities we serve, whether that be overseas or here in the United States, it’s the same mission,” he said.