For some people, the seed of faith is planted at a young age, nourished throughout adolescence and blossoms in adulthood.

But that was not the case for Bro. Carlos José Ferrada Montero, SVD.

As a child growing up in Santiago, Chile, he was rooted in facts and rationality. No one in his life was able to persuade him that God existed, not even his parents or religious teachers. So he figured that God was just a myth and left the believing to others.

Full of ambition and drive, Bro. Carlos entered law school with aspirations of becoming a successful corporate lawyer. But something unexpected happened in his classes. He says two instructors, one who taught natural law and another who taught introduction to theology, gave convincing arguments for the existence of God. For the first time in his life, Bro. Carlos said his heart opened to the possibility that God may be real.

Then, during his first year at law school, a classmate of his left school to join the Society of the Divine Word. 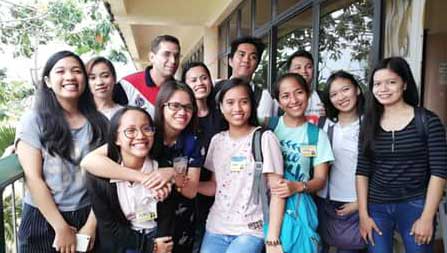 “I remember that I was stunned when I heard that,” he said. “I thought that he was crazy.”

But he stayed in touch with his friend and visited him from time to time at the SVD seminary.

A year after beginning his law education, Bro. Carlos transferred to Pontifical Catholic University because he wanted to be at the best school in Chile. It was then that he prayed for the first time, asking the Lord to help him succeed. He started attending mass every Sunday but his life, priorities and objectives didn’t change much. Buried in his studies and striving to be at the top of his class, Bro. Carlos admits he didn’t take much time to focus on anyone but himself.

In the fourth year of law school, he fell madly in love with a classmate. But those feelings were not reciprocated and Bro. Carlos fell into a state of despair that kept him from preparing properly for his upcoming exams. He turned to God.

During oral exams, Bro. Carlos experienced a calming sensation, despite being unprepared. He took refuge in the Lord and said the experience made him a believer, changing his life forever. He started attending mass daily, focusing on God, dedicating time to family and friends and caring for the needy and marginalized. He joined a group run by a Jesuit-trained layperson and found himself belonging to a community of faith for the first time. That’s when he first had the idea of entering into religious life.

“It was a very disturbing idea that I tried to put aside,” he recalls.

But after a year of the thought persisting, Bro. Carlos says he decided to listen to the call.

“A profound peace came after that decision,” he says.

Thinking back fondly on his visits to the SVD seminary in Santiago where he went to see his law school friend, Bro. Carlos decided to inquire about formation there. He was drawn to the diversity and universality of the order.

The vocation director asked him to finish his last year of law school first, which he says also allowed him time for discernment. Bro. Carlos passed the bar exam and worked professionally for a brief time before confirming his desire to join the SVD Missionaries and starting formation. As he began meeting religious brothers, he says he was struck by their testimonies, as well as their simplicity and humility. His call became more clear.

Five years ago, Bro. Carlos professed his final vows and was assigned to the Southern Philippines where he learned English and Visayan. Then he was assigned to do campus ministry work at Holy Name University in Tagbilaran City. After three years there, he was appointed Assistant General for Brothers Formation and Education by the Superior General and his councilors. Today, he lives at the Brothers Formation Center in Cebu and helps guide brothers who are in formation.

“God has many ways to touch the hearts of young people,” he said. “The important thing is to be open to do His will, like the mother of Jesus, who generously accepted the mission that God entrusted her.”