Divine Word Missionary Priests and Brothers are involved in a wide variety of ministries around the world. Throughout the history of the religious order, some members have used their unique skills and interests to secure their place not just in SVD history, but in world history.

Fr. John Koster, SVD, is credited as the first person outside of the Soviet Union to spot Sputnik, the world’s first artificial satellite that was launched by the Soviet Union in 1957. Originally from Iowa, Fr. Koster had both a master’s degree and a doctorate in physics. In 1950, he was assigned to Ghana where he served as a chaplain and lecturer in physics at the University of Ghana. He went on to use radio astronomy to track Russian and U.S. satellites and was eventually appointed Ghana’s official satellite observer. Fr. Koster spent a total of 28 years teaching in Ghana. Then he was transferred to the Society of the Divine Word’s Fu Jen University in Taipei, Taiwan. He retired in 1997 and died in 2005 at the age of 87. 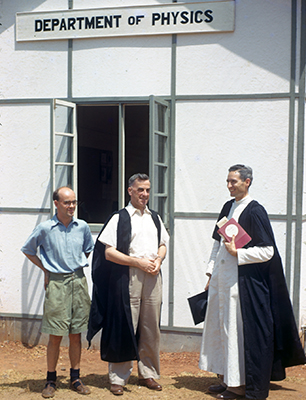 A nation’s stamp of approval

In 1976, the government of Papua New Guinea honored Fr. William Ross, SVD by putting his image on a commemorative postage stamp. Ordained in 1922, Fr. Ross was among the first American missionaries to arrive in New Guinea. According to “In the Light of the Word” by Ernest Brandewie, he began by working as the bishop’s English-speaking secretary in 1926. Later, Fr. Ross was instrumental in expanding mission efforts into the undeveloped region known as the Highlands of Papua New Guinea. He led an expedition to Mount Hagen and founded a mission there. Fr. Ross was also awarded the Order of the British Empire in 1971 for helping refugees from the Japanese during World War II. He lived in Papua New Guinea for 47 years before his death in 1973. In addition to having a hall named after him at Divine Word College in Epworth, Iowa, his photo hangs in the gallery of pioneers in the Mount Hagen Town Hall. 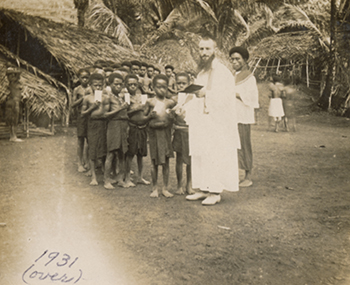 Look, in the sky! A flying bishop!

As the mission in Papua New Guinea continued and Divine Word Missionaries reached new parts of the nation, they started looking for a new means of personal travel and a way to transport goods. The idea of priest-pilots quickly took flight. Among them was Fr. Leo Arkfeld, SVD who would be named Bishop of Wewak shortly after earning his pilot’s license. He and the other priest-pilots used aircrafts for emergency medical evacuations when needed but the primary purpose was to support and advance inland mission efforts before roadways were built to connect them to the coastal regions. According to “In the Light of the Word,” Arkfeld estimated that he piloted approximately 30,000 flights in the 42 years that he was flying. 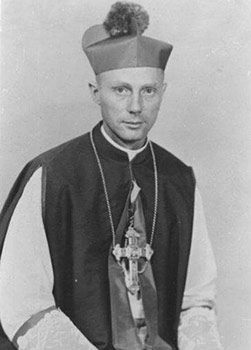 Priest noted as a language leader

In 1957, Fr. Frank Mihalic, SVD, standardized the language that’s most commonly used in Papua New Guinea today. With literally hundreds of languages being spoken throughout the country when he arrived, Fr. Mihalic was able to explain that this new language, which is called Tok Pisin, was developed as a result of people working together while unable to speak one another’s Mother tongue. He published the first edition of “Dictionary and Grammar of Melanesian Pidgin.” Fr. Mihalic went on to create Papua New Guinea’s first Toks Pisin newspaper in 1970. Even without journalism experience, this pioneer managed to successfully get the publication up and running. Fr. Mihalic died in 2001 but the newspaper he started is still in publication today. 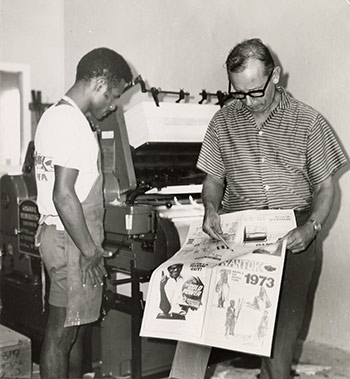 Brother was blessed with a green thumb

Bro. Charles Reckamp, SVD was an award-winning horticulturist who developed more than 140 varieties of day lilies, worked with hybrid irises and developed two conical evergreens. He helped establish and grow the Mission Gardens at the North American headquarters for the SVD known as Techny in Illinois. There, he trained many other religious men and seminarians about the art of horticulture. The names he gave to the plants he created were often a nod to his faith and even the Society of the Divine Word. They included hosanna, heavenly treasure, exaltation, Techny arborvitae and Mission blue spruce. Bro. Reckamp also contributed to the landscaping on the Divine Word College campus in Iowa when the school was converted to a four-year college in the 1960s. According to his obituary in the Chicago Tribune, Bro. Reckamp was the first recipient of the Linnaeus Award from the Chicago Botanic Garden in 1983. He died in 1996 at the age of 91 but the plants that he developed are still widely used and grown throughout the U.S. today. 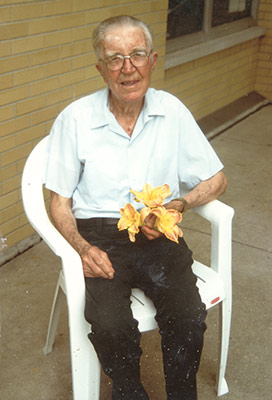 Fr. Charles Erb, SVD secured his place in history for a number of notable experiences. Originally from New York, he went to Austria to study anthropology and was ordained there in 1933. He went on to serve as a U.S. army chaplain. Fr. Erb was with the U.S. Army’s 42nd “Rainbow Division” that liberated the Nazi concentration camp Dachau. The U.S. Army website states that approximately 32,000 people were freed from the camp but the members of the Rainbow Division witnessed unthinkable atrocities and loss of human life while there. Among those being held at Dachau was a group of clergymen. Fr. Erb later reported that he found at least one of his classmates from his formation program in the group. After his honorable discharge from the army, Fr. Erb was assigned to work on mission in Ghana. He spent time as the director of the Catholic Press Bureau and was the co-organizer of the first National Eucharistic Congress in Kumasi. Among other accomplishments, Fr. Erb made popular film documentaries about Divine Word missions. He was awarded the Pro Ecclesia et Pontifice medal by Pope John Paul II in 1987 for his work in Ghana. 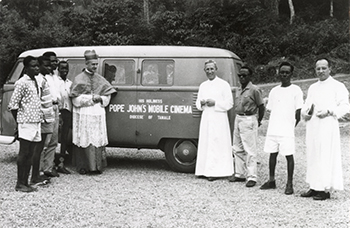 Brother was working with quite a set of pipes

In the 1920s, Divine Word Missionary Brothers built a pipe organ from parts that they collected from around the world. Among the items they compiled was a motor built, in part, with an engine from a World War I airplane. Among those who helped create the custom organ was Bro. Norbert (Roman) Hertel, SVD. The enormous instrument is made up of 3,000 pipes, according to Communities of the Word – Techny (page 15). The main portion was purchased for $500 because it was salvaged from a fire that destroyed the Busch Temple Conservatory for Music in Chicago. Bro. Norbert continued to serve as the primary Techny organist for 60 years. He retired from playing the Techny organ in 1994 and passed away in 1996. 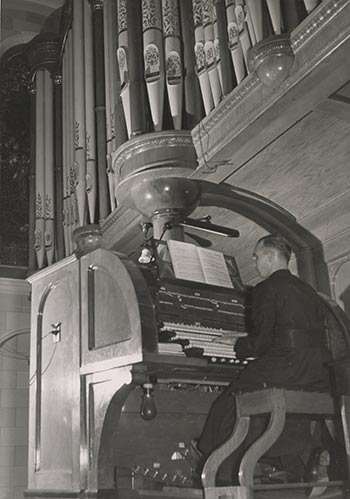 Photos courtesy of Robert M. Myers Archives, Chicago Province of the Society of the Divine Word and the SVD Curia Archives.