Saint Arnold Janssen was born into a devoutly Catholic family in Goch, Germany in 1837. Growing up, he was greatly influenced by his father, a man of deep faith who revered the Holy Trinity and the Word of God. These would become integral parts of SVD spirituality and charism, with the latter becoming the central name of his missionary society, the Divine Word.

Entering a minor seminary in Gaesdonck, in 1849, he went on to study mathematics and the natural sciences and was ordained in 1861. For twelve years, he taught in a public school. During this time, he became involved in a movement called the Apostleship of Prayer League, and soon became its director. To support its cause, he wrote a small pamphlet, which became quite popular. He left his teaching position in 1873 to focus on the apostleship and to become chaplain of a religious order of women, the Ursuline sisters, in Kempen. After writing several books on prayer, he began publishing a magazine, “The Little Messenger of the Heart of Jesus,” which was also quite successful. He soon discovered two things: there was a market for such printed materials and there was support in his country for a German missionary society.

This was during the height of European colonialism. Unlike many other countries, Germany was not sending missionaries to its colonies overseas, and in fact, the German government was placing serious restrictions on the growth of the Church. With a deep faith in Divine Providence and being encouraged to create a German-sending missionary society, he moved with three candidates across the German Border to a rundown inn in Steyl, Netherlands, where he founded the Society of the Divine Word in 1875, which would be funded by the sale of his printed publications.

After a rocky start when the first candidates left, many others soon replaced them. In fact, he had to add onto the small inn almost immediately to accommodate the flow of new candidates, followed by four new buildings over the next five years. 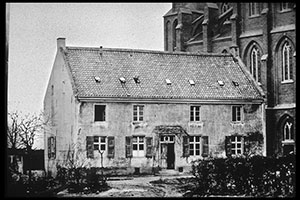 Steyl, Holland: Birthplace of the
Society of the Divine Word

In 1879, he sent his first missionaries, Fr. John B. Anzer, SVD, and Fr. Joseph Freinademetz, SVD, to China. Saint Joseph was canonized a Saint of the Church with Saint Arnold, by Pope John Paul II, in 2003.

Saint Arnold continued to guide his missionary order for 34 years. At the time of his death in 1909, his society included 1,500 priests, brothers, Missionary and Adoration Sisters working on mission in ten countries. Today those societies number nearly ten-thousand members in over 80 countries.