In 1875, during the height of European colonialism, Saint Arnold Janssen founded his missionary order, the Society of the Divine Word (SVD), in Steyl, Netherlands. From humble beginnings, the SVD has grown into the largest international missionary congregation in the Catholic Church.

Born in Goch, Germany into a devoutly Catholic family, Saint Arnold was greatly influenced by the faith of his father, who revered the Holy Trinity, and the Word Incarnate. These would become integral to SVD spirituality and charism, and because of his devotion to the Word of God, Saint Arnold named his missionary society, “Divine Word.”

Educated in math and science, Saint Arnold was ordained in 1861 and became a teacher. A few years later, he joined the Apostleship of Prayer League and in 1873, left teaching to focus on his duties as its director. He found success in writing and eventually published a magazine, Little Messenger of the Sacred Heart, which helped him discover that not only could he raise money through his publications, but German Catholics supported the missions. Many of the colonial powers, like France and Italy, had missions to their colonies, but Germany did not. In fact under the government of Otto von Bismarck, Catholicism was being repressed.

Encouraged to create a German-sending missionary order, he attracted three young candidates to travel with him across the German border, to a former inn in Steyl, Netherlands, where he founded the Society of the Divine Word on September 8, 1875.

Two of the three left over a disagreement with Saint Arnold, who insisted each member of his society be bound by vows of poverty, chastity and obedience.The norm in other countries at the time was for missionary societies to be made up of diocesan priests, who were only bound to the society by a promise to serve in the missions.

After the two left, however, word spread that there was a German missionary society in Steyl, and candidates came in numbers. Before the first year was done, Saint Arnold had to add on to the little inn. Over the next five years, he had to add four new buildings, all to accommodate the growing number of men interested in serving in the missions.

In 1879, Saint Arnold sent his first two SVD missionaries to China. Fr. John Baptist Anzer, SVD, became a bishop in China, and Saint Joseph Freinademetz, SVD, who never returned to Germany, was canonized a Saint of the Church, by Pope John Paul II, with Saint Arnold, in 2003.

Meanwhile, the primary source of funding for the SVD and its missions was its printed publications. Workers Saint Arnold brought on to do much of the work began to express a desire to be more a part of the society, so in 1878, Saint Arnold added the brotherhood to the society by accepting two candidates, and in 1881, Mercolinus Elskemper was the first to take vows as a brother member of the SVD.

Religious women come on board

In 1895, Brother Wendelin Meyer, SVD, came to the United States, initially to sell subscriptions to SVD publications. Discovering the possibility of many vocations, he was quickly followed by other SVDs. By 1897 they had settled on a farm north of Chicago, which became known as Techny, where they established their first seminary in 1909. Today, it is the headquarters for the SVD Chicago Province.

Worldwide, from 1889 through 1936, the SVD established missions in Argentina, Africa, Papua New Guinea, Indonesia and India. 1946 marked the consecration of the first Chinese Cardinal, Thomas Cardinal Tien Ken-sin, SVD, Archbishop of Beijing. In 1966, Bishop Harold Perry, SVD, became the first African-American Bishop in the United States. Fr. Joseph Tri Vu, SVD, was the first Vietnamese priest to be ordained as an SVD, in 1985.

Today, there are approximately 6000 Divine Word Missionary priests and brothers serving God’s people in more than 80 countries around the world. 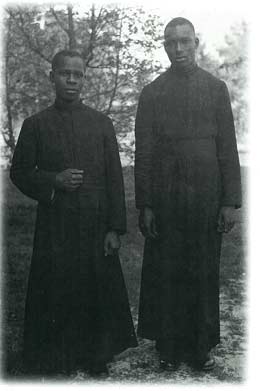 The Arnoldus Family: A trio of religious congregations