Persistance pays off for DWC senior

It takes courage and faith for a young man to answer the call to religious life, but that’s just the first of many steps in the formation process. For one Divine Word College student, acknowledging God’s plan for him was easy compared to the next step – finding a congregation to accept him as a candidate.

Truong An Nguyen was just 12 years old when he first started feeling called to the priesthood. Growing up in Cam Ranh in Vietnam, his grandparents encouraged him to be an altar server at church and he was inspired by the priests.

At 18, he took an entrance exam for a major seminary in Vietnam but wasn’t accepted because he was studying chemistry in a different city. Then Truong spent a short time living and working with the Don Bosco Salesians in the city of Da Lat before moving with his family to Seattle, Washington in 2009. With few connections in the United States, he took a job at a local dollar store that had a Vietnamese owner but quit after a few months. Truong accepted a new job at a hotel, working in a variety of roles over the next four years. Then in 2014, a Vietnamese priest from the Redemptorists congregation in Dallas, Texas contacted him about doing a Come and See visit. Truong quit his job at the hotel and pursued the opportunity, but was ultimately not accepted because he didn’t have a degree in English. It was another roadblock.

He returned to Seattle to study English but could only afford to attend one quarter at the community college. For the next year, he mostly stayed home and took a month-long trip to Vietnam. After returning, he was hopeful that he may move forward in his formation as he attended a Come and See visit with the Benedictine congregation. Again he was rejected. Next he participated in a weeklong spiritual exercise with the Jesuits and they also said “no” to his discernment. 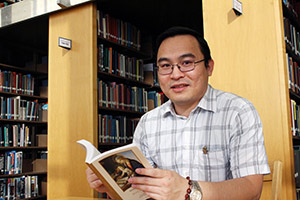 In need of work, Truong briefly hired on at an airport base before switching to a job at a commercial trucking company in Utah. Hoping to drive 18-wheel trucks, he passed the computer test required to obtain a Commercial Driver’s License, but the company sent him home because of his limited English skills. After being denied again, he started working as an in-home caregiver for the elderly.

That’s when he got a call from Vocation Director Fr. Anthony Cong Nguyen, SVD and finally found the “yes” he’d been waiting for. By pure coincidence, a family friend of Truong’s knew Fr. Anthony and shared his contact information because she knew the young man felt called to religious life. Truong enrolled at DWC in August 2016 and earned his English as a Second Language (ESL) Certificate of Completion in May 2017

Now at age 31, Truong is a senior at DWC and looking forward to graduating in May. He has met the criteria for the Academic Dean’s List nine times during his studies at Epworth. He says he’s also developed a love for philosophy, theology and intercultural studies through his undergraduate studies. Truong is looking forward to moving on the next step in his discernment after graduation. “I hope that what I have learned so far can help me on my way to follow God and to serve others,” he said 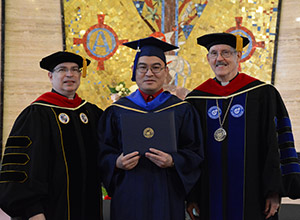