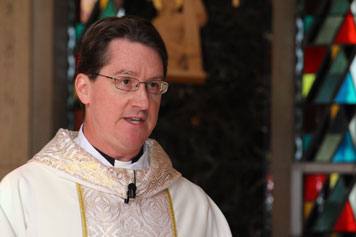 “(The priest) gave us an embrace after he washed our feet and I just felt that Christ himself was literally embracing me, accepting me, calling me forth into a deeper relationship with him.”

The parents of Fr. Adam MacDonald, SVD think that what he is doing is pretty cool.

It’s because he is a Vocation Director, someone who will visit with parents and talk with their young sons after they have shown an interest in becoming a part of one of the largest missionary orders in the world.

They remember when a Divine Word Missionary came to their home for a visit when their 16-year old son Adam expressed an interest in religious life. They were impressed that someone would travel hundreds of miles to personally visit them and talk about such an important decision.

“My parents still remember that, ‘How cool that you will do what that priest did for you in terms of calling you for your vocation,'" Fr. Adam said, “and what a privilege for me to be in this role.”

Religious life was not always at the top of the list of things he’d like to do with his life. Born in 1970, Fr. Adam grew up in Flint, Michigan, the fifth of six children. Though his parents were devout Catholics, he wasn’t particularly interested in the faith—that was until he was 15 and the parish priest asked him if he would be part of the Holy Thursday service and allow his feet to be washed as one of the 12 Apostles.

“He gave us an embrace after he washed our feet and I just felt that Christ himself was literally embracing me, accepting me, calling me forth into a deeper relationship with him,” Fr. Adam said.

Over the coming weeks and months, he became more involved in the parish and decided he wanted to enter religious life. He responded to a card from Divine Word College, paid a visit, enrolled in 1988 and graduated in the Class of ‘93. From there, Fr. Adam went to the Novitiate and proclaimed his First Vows in 1994. While studying for his Master’s of Divinity, he spent two years in the Society’s Cross-cultural Training Program (CTP) to get a real taste of missionary life, serving in the Philippines. He returned to Chicago to complete his degree and was ordained in 2000.

Fr. Adam returned to the Philippines for two years as a Divine Word Missionary. In 2003, he returned to the Chicago Province headquarters in Techny, Illinois, first as Assistant Secretary of Education, then Province Director of Studies. During that time, he was elected to the Board of Directors of the National Organization for the Continuing Education of Roman Catholic Clergy. He became a member of the House Council of the Techny Community, was later elected Vice Rector and eventually became Rector of the Techny SVD Community—believed to be one of the youngest Rectors in the Techny Community’s storied history.

In 2011, Fr. Adam was elected to the Provincial Council—which is the highest level of governance within the Province. Having a long-time interest in formation, spiritual direction and vocation work, Fr. Adam was offered the opportunity to become a Vocation Director and return to Divine Word College.

In a sense, he has come full circle, thinking back to the significant impact two priests had on his life.

“From the priest, washing my feet, embracing me and the feeling that Christ was with me—to the personal visit by the Divine Word Missionary to our home and his personal invitation to come here,” Fr. Adam said. “That personal contact became a model for me.”