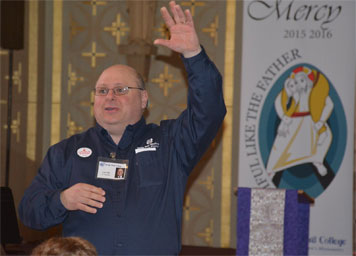 “We are all – both lay and religious – called to further the missionary work of the Church. . . "

“Finding out who we are and utilizing our special gifts and talents for God is part of SVD seminary formation,” says Len Uhal, National Vocation Director for the Society of the Divine Word. “I’m grateful to have had the opportunity to discern a religious vocation in the context of a seminary formation program.”

In 1983, Len graduated from Divine Word High School Seminary in East Troy, Wisconsin, and went on to Divine Word College in Epworth, Iowa. “Seminary life fosters holistic development – on a spiritual, personal and emotional level,” he adds. His own formation program of prayer, spiritual guidance and study, along with his brief mission experience in Mexico, all contributed to his discernment process. Len graduated from DWC in 1987 and was accepted to the novitiate for that fall.

After further reflection and discernment, he returned to Chicago for a year and worked within the archdiocese at a group home for troubled youth. In 1988, Len became a drug and alcohol abuse counselor at Mercy Hospital in Dyersville/Dubuque, Iowa. After 11 years there, Len accepted a new position as Alumni Director for the Society of the Divine Word at the college in Epworth. In 2003, he assumed the additional role of National Vocation Director for the Society, holding both positions until January of 2007. Len now works full time in vocation ministry.

“We are all – both lay and religious – called to further the missionary work of the Church, which is the charism of the Society of the Divine Word,” Len says, “even though our paths may take unexpected turns along the way.” Today, Len and his wife, Sue, along with their children John, Katie and Joe, fulfill that call by their involvement in their parish, community and ministry with the Society of the Divine Word.