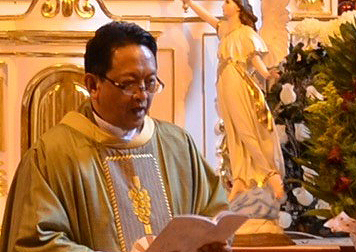 ". . . with all these experiences, I am ready and willing to share them with others, with inquirers, with discerners, to walk with them, to journey with them toward their goals in life."

If you wonder about life as a Divine Word Missionary, talk to Fr. Emilio Reyes, SVD. He has known parish work in the midst of dictators and drug lords and the challenges of inner cities. He has led the reflective life of a spiritual director and experienced the demands of administration and leadership. Fr. Emilio has stories to tell.

Born in Manila, Philippines, he was an altar boy for 14 years when thoughts of the priesthood captured his imagination. He entered Divine Word Seminary in Tagaytay and was ordained in 1985. His first assignment was Colombia, South America and he was then sent to a parish in Panama – which was part of the SVD Colombian district – when the corrupt dictator Manuel Noriega was in power. A few years later, the Panamanian leader laid the groundwork for a massacre and Fr. Emilio was among his targets.

“Noriega had this plan for Christmas Eve of 1989, to kill all foreign missionaries as they celebrated Mass,” Fr. Emilio said. “The plan was discovered by U.S. intelligence, which lead to the invasion of Panama by air, land and sea –  “Operation Just Cause”—to get Noriega out and to avoid the bloodshed.”

After dealing with the aftermath of the invasion, Fr. Emilio was sent to a parish in Medellín, Colombia, which was a hot bed of cocaine production during the heated drug war with the United States. One of the biggest names among the drug lords was in his midst.

“I didn’t know it, but Pablo Escobar was my parishioner, living in hiding five blocks away,” he said. “But I suspected something because practically every Sunday, there would be a thick pack of bills in the collection box.”

Later killed in a gunfight, Escobar was replaced by the notorious Cali Cartel. All the while, Fr. Emilio worked with the people of his parish, good people who wanted to help their fellow Colombians. Every year, they organized mission trips into the mountains to help improvised farmers. His path sometimes crossed those of Colombian rebels and militias. Over time, his approach to everyone became quite simple—be a good listener.

“They have lots of stories to tell,” he said. “Then with that, we insert Gospel values, the Gospel of Hope.”

In 1994, he returned to Divine Word Seminary in Tagaytay where he became a spiritual director and member of the Arnold Janssen Spirituality team. Wishing to return to the missions, Fr. Emilio was granted an assignment to Argentina. He served in parishes in Misiones and Posadas and was elected SVD District Superior by his confreres. Before leaving Argentina, he was the administrator of the SVD retreat and retirement home at the National Shrine of Our Lady of Fatima.

His next assignment brought him to the United States and the SVD Western Province. Beginning as a director of an SVD retreat center, he moved to parish and other work in Oakland, San Francisco, San Diego and Los Angeles, always going where he was needed and his bi-lingual skills could be put to use.

Learning of an opportunity to do vocation ministry, he was granted an assignment in 2018 to become part of the Tri-Province Vocation Team.

“I applied for this ministry because I have something to contribute, and with all these experiences, I am ready and willing to share them with others, with inquirers, with discerners, to walk with them, to journey with them toward their goals in life,” he said. “But even in my first years in the Philippines before I went to the missions I was able to encourage and inspire some of our altar boys and parish workers to the SVD. They are now in the missions, they are SVDs.”