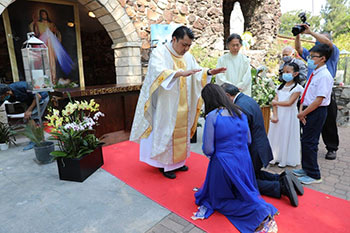 "I think that's when you know you've found the right path -- it feels right."

Fr. Thinh Ngo, SVD was excited to learn that his first assignment as a Divine Word Missionary priest would be serving as a vocation director for the SVD Tri-Province Vocation Office in the USA. Newly ordained, he knows exactly what young men are experiencing as they discern their call to religious life because not long ago, he was in their shoes.

In 2008, the California native was searching for meaning in his life. He briefly considered a career in firefighting because he knew he wanted to help people but something about the profession just didn’t feel like the right fit. When he attended a Missouri festival for Vietnamese Catholics called Marian Days, Fr. Thinh said he started to seriously contemplate religious life. His mother encouraged him to attend daily Mass and he started researching religious congregations but still felt uncertain about his future.

One day, his mom told a woman at a local religious store that her son was thinking about becoming a priest. The woman told her about an SVD vocation director who lived nearby. That night, Fr. Thinh asked God to guide him. He asked for a sign to show him where he belonged. The next day, he got a call from former Vocation Director Fr. Trung Mai, SVD.

“He talked to me and he was like, I’ll be at your house in 45 minutes,” Fr. Thinh recalls.

That December, Fr. Thinh traveled to Divine Word College in Epworth, Iowa for a Come-and-See Visit. The following month, he enrolled in classes and started diving into discernment. For three years during his undergraduate program, his work-study assignment was in the Vocation Office at the college. It was a thrill to be part of the process as new candidates learned about The Society of the Divine Word and explored their own call. After completing his graduate courses and serving two years as a missionary in Chile, Fr. Thinh graduated from Catholic Theological Union with a Master of Divinity and in August 2020 he was ordained. He rejoined the vocation team at the college as a full-time staff member that summer.

“I went through the program here so I know the whole process from beginning to end. I’m a product of this whole system,” he said.

The path to the priesthood wasn’t always simple and there were many moments when Fr. Thinh said he questioned if he was cut out for it.

“Every year I debated whether I should stay or go. That was one of my challenges but something just kept telling me to push on,” he said. After a while, Fr. Thinh realized that the path he was on finally felt right. Now as a vocation director, he hopes to provide guidance and support to young men who are discerning their own call to religious life and help them determine where it is that God is calling them.

When he found out that he’d be coming back to DWC for his first assignment, Fr. Thinh said it felt like a homecoming.

“God calls people in different ways that impact their lives. During my journey, I’ve experienced a lot of grace from God,” he said. “It feels right. I think that’s when you know you’ve found the right path – it feels right.”