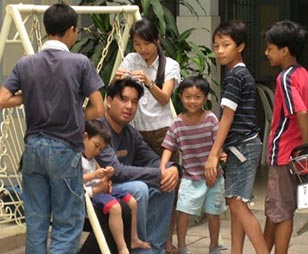 "It's not just about sacraments and liturgies – it's more than that. It's more about serving God's people, just as Jesus did. His mission is to bring healing to the sick and to invite sinners to the table to feed the hungry and forgive sinners."

Fr. Tuan Khoi Hoang, SVD says he first felt called to religious life when he was a child but that doesn’t mean that his path to the priesthood was simple. He faced his fair share of challenges, complications and hesitation.

Hearing the call
Growing up in Stockton California, Fr. Tuan attended daily Mass with his parents and eight siblings. As the youngest in the family, this dedication to their faith made an early impact on him. By age 8, he started thinking about religious life and even told his parents about his interest in the priesthood. But things changed as he entered high school and he found himself shifting his focus from his religion to his friends. It wasn’t until later when he was enrolled at a local community college that Fr. Tuan realized that something just didn’t feel right in his life.

Pondering religious life
Until then, most of the priests who Fr. Tuan met were diocesan priests, like his parish pastor. After learning more about the religious order, Fr. Tuan said he was drawn to the missionary aspect of the Society of the Divine Word. In 2000, he enrolled at Divine Word College in Epworth, Iowa to begin his formation and pursue an undergraduate degree. He also took the opportunity to try his hand at the missionary lifestyle. He got involved at local nursing homes through the college’s ministry program and says he learned lot.

“That helped me expand my idea of what priesthood is,” he said. “It's not just about sacraments and liturgies – it's more than that. It's more about serving God's people, just as Jesus did. His mission is to bring healing to the sick and to invite sinners to the table to feed the hungry and forgive sinners.”

Preparing to be a missionary
After finishing his studies at DWC in 2003, Fr. Tuan moved to Chicago to spend a year in the SVD novitiate program. During that portion of formation, candidates focus less on academics and more on prayer, reflection and study of consecrated life. “It was one of the best but also one of the most difficult years of my life,” he said. After struggling to discern whether he wanted to proceed with becoming a Divine Word Missionary Priest, he ultimately decided to remain in the program, taking First Vows with the religious order in 2004. Fr. Tuan spent the next two years studying theology at the Catholic Theological Union before moving to Vietnam for his Cross-Cultural Experience. Although Fr. Tuan’s parents came to the United States from Vietnam in 1978 to escape the Communists, he had never visited the country or polished his grasp of the language. Fr. Tuan says he learned a lot about his own culture and heritage during his two-year experience there. He also had an opportunity to work at an orphanage, where he faced a number of challenges as he tried to keep 26 children, ages 5 to 17, on track with routines and school schedules. He says he was grateful for the guidance and support of more experienced volunteers and religious sisters who showed him the ropes.

Taking a detour
After returning to Chicago to complete his theology studies, Fr. Tuan found himself facing a different formation obstacle – love. When he was nearing the end of his formation program, Fr. Tuan fell in love. He decided to explore if perhaps God was calling him down a different path.

“It was hard for me to decide. I knew that I could not go on with ordination when I was in love with her, so I decided to leave for further discernment,” he said.

For the next three and a half years, Fr. Tuan explored what a different kind of life would look like. He had a girlfriend and worked as a pharmacy tech. He says his vocation didn’t disappear, but he felt it was important to seriously consider all possibilities. His relationship flourished at first and he even considered marriage at one point but in the end, he and his girlfriend decided to go their separate ways. A year after their breakup, Fr. Tuan reached out the Divine Word Missionaries and asked to be accepted back into the formation program.

In 2013, he returned to Chicago to complete his studies and finish the formation program. Fr. Tuan was ordained as a Divine Word Missionary Priest in May 2018. That moment provided a new clarity for him.

“All the dreams, challenges and difficulties that I experienced during high school and during my relationship with my ex-girlfriend, in that moment at ordination I felt that it was all a blessing. I realized that in the future, I will have challenges and I will experience a lot of difficulties but now I know that God is with me,” he said. 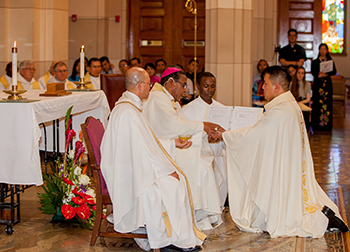 Ministering in Ecuador
For his first missionary assignment, Fr. Tuan was sent to Ecuador, where he lived for three and a half years. After learning Spanish, he spent most of his time doing various forms of parish ministry. He worked in both the Coastal Region and the Sierra Region.

During a portion of his time in Ecuador, Fr. Tuan learned about farming. He helped raise chickens, ducks, turkeys, rabbits and even guinea pigs, which are a delicacy in the culture. He found the agricultural work difficult in the beginning, but after some time he started to enjoy it.

The most meaningful experiences he had involved his collaboration with the poor. Fr. Tuan only served one parish, but it consisted of more than 20 mission stations. He helped deliver food to people in the area and raised funds to buy materials so the community could construct a proper chapel for worship. Then when the COVID-19 pandemic reached the area, their efforts shifted. People in the community who died from the virus were being thrown out in the streets. Desperate to help, Fr. Tuan said he and other volunteers packed bags with shelf-stable food and distributed them to those in need. 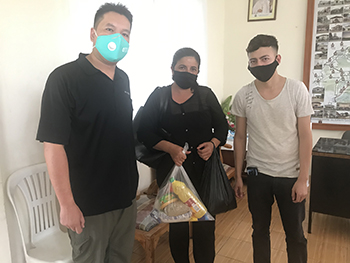 “The more I lived with the people and adapted to their country and to the ways that they live, I just loved it. I began to love working in Ecuador,” he said.

Leading the way
In the summer of 2022, Chicago Province leaders asked Fr. Tuan to come back to the United States and serve as a vocation director. Now he’s based in Epworth, Iowa again but spends most of his time traveling to meet with potential SVD candidates.

“This work is very important,” he said. “I want to find ways to lead young people and help them reconnect with their faith and their relationship with the Lord. I’m also looking forward to leading young people who are considering religious life.”