The congregation at St. Joseph the Worker Church in Wheeling, Illinois is made up primarily of Spanish-speakers, people of Polish descent and English speakers. The members of each of these groups have traditions that they want to maintain and customs that they cherish.

About four years ago, the diocese asked for help from the Society of the Divine Word to supply a priest who could speak Spanish. A Mexican priest by the name of Fr. Jesus Mata Martinez, SVD, arrived to answer the call. Over the past two years, two more SVD priests and an SVD seminarian joined him. They are Fr. Marcin Karwot, SVD, who is from Poland, Fr. Messan Kodjo Tettekpoe, SVD, from Togo, and Seminarian Boromeo Soe, SVD, who is from Myanmar.

Together, this group of four men who were raised in different parts of the world is setting an example of intercultural acceptance and cooperation while serving the different cultural communities in the Illinois parish.

They strive to honor the heritage of the three cultural groups by offering Mass in English, Polish and Spanish. The parish also holds special events that honor the cultural practices from each group. The pastoral team acknowledged that parishioners are sensitive about the traditions that are important to them. They don’t want to risk losing them and want younger generations to experience and embrace them.

“We try to bring people together,” Fr. Marcin said. “Sometimes we have Masses and devotions in three languages.

In spite of their differences, these cultural groups are all a part of one parish community, so the pastoral team aims to unite them, as well. Spanish and English speakers are encouraged to attend events that honor the Polish traditions and so forth. The team says they’ve been happy to see members of the church getting involved. 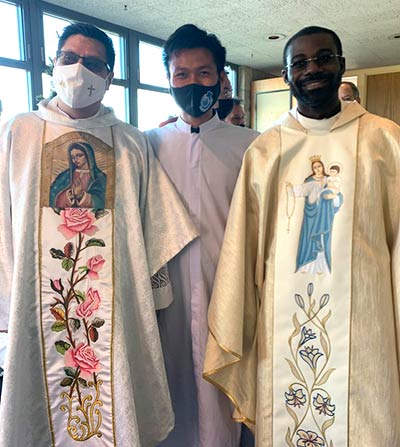 “That shows the willingness of the parishioners to be in a multicultural parish, to learn some cultural activities from one another,” said Fr. Messan. “A practical example is during the Feast of Guadalupe; they have a special dance. One that Polish people or an Anglo might not know. So, when they come, they discover something new. That's an advantage.”

Fr. Marcin agreed, saying that this is the future of the Church.

“We’re living in a multicultural society,” he said. “What is beautiful, is that if you travel from Africa, you can come to this parish and see this is the same Mass that you’re used to. You will see other people praying the same way and having the same gestures in the church – or it's maybe a little bit different – but you feel at home. That's the future, and that's something really good – that's our goal. We would like the people to form one family because, of course, they have their own devotions and important things, so they will attend the Sunday Mass in their language, but that doesn't mean they have to be separated from each other. Those younger generations are basically Americans who were born here – they go to school here and have no problem with the language.”

The parish’s four-person pastoral team is a prime example of what cooperation among people from diverse backgrounds can look like. While it’s not always easy, they say it’s important.

“I feel it's a witness to them – they see men from different ages, different experiences in mission and different cultures. “They see us together all the time, they see us going out – sometimes just to eat – they see it, and they say ‘wow,’” said Fr. Marcin.

Change won’t happen overnight, but the parish leaders from St. Joseph the Worker said that’s ok. They’re not trying to erase anyone’s culture or eliminate any sacred celebrations. Instead, they’re working to honor each one while also inviting the congregation to participate in their neighbor’s culture, too. 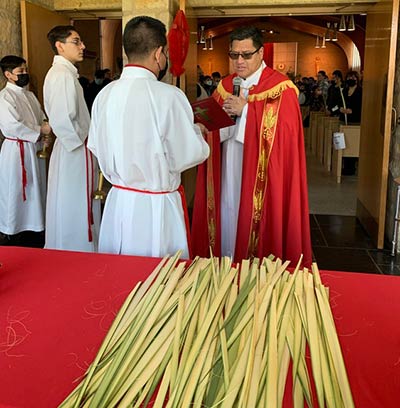 “You know, when change comes, it is a little bit difficult, but in general, our parish is open to learn new things from other core cultures,” said Fr. Marcin.