Last November, the Christian women from Good Shepherd Parish in Simanjiro, Tanzania, gathered in one of the parish’s 30 outstations for their annual forum known as Semezana—Swahili for “let’s talk.” In this forum, the women talk about the issues affecting them in their homes and how they can help one another.

Last year’s Semezana focused on how women, especially the Maasai women living in cattle and sheep herding cultures, can grow their own economy independent of their husbands, who own all the sources of income in the family. It is important to note that in Maasai culture, women are counted as part of men’s property. Women do not own land or profitable livestock (cows, goats and sheep). Instead, they have donkeys they use to transport water across long distances.

In my input, I focused on alternative sources of income for the women. One of my suggestions was to raise chickens. The Maasai in general do not eat chicken meat because they regard a chicken as a bird. While most men will walk away from a meal containing chicken, the women have no problem eating it. 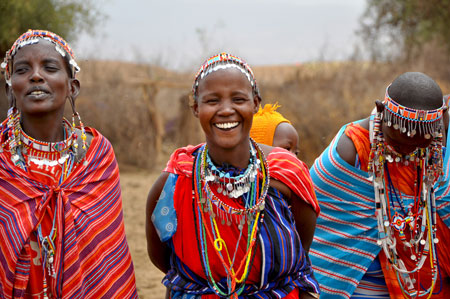 I have had some experience with this aspect of Maasai culture. I am allergic to red meat, and when I first moved here the people had a difficult time finding what to offer me when I visited the villages for Mass. For the Maasai, to give chicken meat to a visitor, especially a priest, is considered an insult to the visitor. However, after I explained to them my red meat allergy and that chicken was my favorite meat, they started preparing chicken dishes for me. After my arrival, more women began keeping chickens at their homes.

For the last two years, I have been urging women to raise chickens both for food and as a source of income. The local chicken is commonly known as Kienyeji chicken, and it is a hearty breed. Men are not interested in chickens and so the women can sell them and have some income for themselves. This has turned around the economy of women here because there currently is no homestead without chickens. I normally buy chickens from the women for my kitchen.

The next project we talked about was beekeeping. Here in Simanjiro, we have a lot of wild bees. Honey has always been in demand and people cannot produce enough. This too is not a concern for men and only women keep bees. We discussed how to keep bees for honey on a large scale.

The Christian women have groups and leaders both at the outstation level and at the parish level. Using this platform, they can start common projects. The income generated by those projects can be given as soft credit to individual women and the profit shared as dividends. What the women need is capital to buy beehives and to pay for training on how to rear chickens in greater numbers.

Finally, we talked about food security. During the rainy season when there is plenty of grass, life is smooth. However, during the dry season life can be very challenging, especially for women. Though men are the ones who provide food in the family, during droughts they are not seen in the homestead. While some go with their livestock to search for grass, others keep away from home because there is nothing in their pockets. The women have to provide food for the children.

An average homestead has more than 10 to 20 children and five to 10 adults. Men care so much about the animals that during a drought they will give maize, a valuable grain, to the cows. On this challenge, we talked about how to store foodstuff, such as maize and beans, so that women and children do not suffer during dry seasons.

I strongly believe that as Semezana “let’s talk” continues to grow, it will empower the Maasai women. The fate of the Maasai herding community can change for the better.