On October 15, 1895, after a 10-day voyage from Bremen in Germany, Brother Wendelin Meyer, SVD, walked down a gangplank at the port of Hoboken, New Jersey. He was the first Divine Word Missionary to set foot in North America.

Who was Brother Wendelin, and why was he sent to North America? From the beginning of the Society of the Divine Word in 1875, Arnold Janssen envisioned developing a mission press to spread the Word of God to German-speaking peoples throughout Europe. Popular items that came off the press included the Sacred Heart Messenger, Stadt Gottes, a magazine for families, and St. Michael’s Almanac, a combination calendar and magazine with emphasis on the foreign missions.

Several Brothers traveled throughout Europe, selling magazine subscriptions. The funds were used to support the mission house at Steyl and the building projects of the Society. By the 1890s, funds were running short, and there was a need to expand the market for the magazines. Fr. Nicholas Blum, the general procurator and priest in charge of the press and the Brothers, wrote to the founder in 1893: 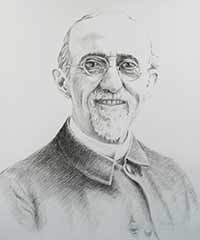 Should we perhaps think about opening a market in North America and should I start preparing for this possibility? I don’t think it would do any harm, but it would mean that a Brother would have to go over there and arrange a place where books and magazines might be stored.

In 1895 the press had leftover copies of St. Michael’s Almanac. The decision was made to update the calendar, add the already existing mission articles, and send them to the United States. Brother Wendelin Meyer was chosen for the job.

Josef Meyer was born in 1857 in Duppach, Germany. He was trained as an elementary school teacher and taught for a time in a government school. In 1887, at the age of 30, he decided to join the Society of the Divine Word as a religious Brother. He was given the religious name of Brother Wendelin. He was outgoing, pleasant, with a good sense of humor, and an easy way with people. He was assigned to the press in Steyl as a “traveling Brother,” one of several who traveled throughout Europe making the community known by selling books and magazines from the press. He was also familiar with America as four of his father’s brothers and sisters lived there. 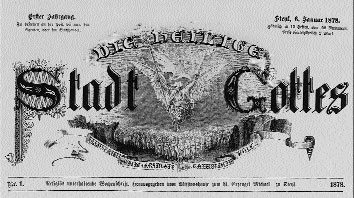 Stadt Gottes is one of the original publications of St. Arnold Janssen's printing operation.

In early 1895, he began his study of English while recovering from a bout of pneumonia. Arnold Janssen soon realized that Wendelin was capable of making observations and doing research, and then sending reports to the General Council. When he departed from Steyl on October 3, 1895, he brought with him a long list of names and addresses from Steyl of alumni and relatives of Society members now living in the United States.

He quickly made friends at St. Francis Hospital where he was staying and began to sell magazine subscriptions to them. He then rented a room near the hospital and found someone to teach him English.

Steyl had sent 10,000 copies of the 1897 almanac, for sale during 1896. He figured that he would be able to sell between 15,000 and 25,000 copies the following year. He contacted a Franciscan, Bonaventure Hammer, to translate the 1898 Almanac into English. Steyl printed 15,000 copies. Wendelin rightly concluded that there was a good market for Catholic reading materials and for bringing mission awareness to America.

With this initial success, Wendelin soon needed a bigger place and more help. Arnold Janssen sent Joseph Stiller – Brother Homobonus (i.e. “good man”). He was born in Prague, was nine years younger than Wendelin, and had experience as a traveling Brother, like Wendelin. Needing more space, they soon rented a building across the Hudson River from New York in Jersey City, New Jersey. There they lived happily, although money was tight. Local people would come to their aid. Brother Homobonus describes their first Christmas together: 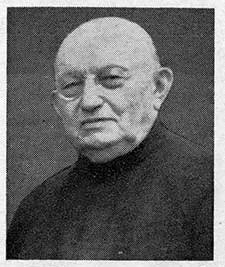 Our first Christmas together in America had to be celebrated in proper form. Brother Wendelin decided we should have a small Christmas tree. We had our much-used house organ and we had two strong voices. Brother Wendelin sang tenor while I sang bass. We invited a few friends, among them our grocery man on the corner. As far as we could figure out, he was a fallen-away Catholic and his wife belonged to the holy rollers. They were certainly very good to us and treated us more like family members than customers. They were so touched by our little Christmas celebration that they asked us to repeat it for them in their own home. Brother Wendelin played his violin while I sang all the German Weinachtslider (“Christmas songs”) I knew. This in a completely American surrounding. I knew only a few English words and said ever so many times, “Yes” and “No,” not knowing whether it fit the question or the conversation. Still we had gained some more friends.

By 1896 the two Brothers were selling magazines from a rented house. The question for Arnold Janssen and his council was the possibility of something permanent. There were a number of reasons in favor of a permanent place. The United States was too important to ignore, with its wealth, opportunities, and place on the world’s stage. There were five million German immigrants in the United States, found primarily in Midwestern States like Illinois, Indiana, Wisconsin and Iowa. In addition, missionaries fluent in English would eventually be needed in countries like the Philippines. In September 1896, the Council voted unanimously to establish the Society of the Divine Word in America. Arnold Janssen decided to send three more men to America, with Fr. John Baptist Peil as superior. When they arrived in September 1897, the community numbered five.

The question for the community was where to permanently settle. Wendelin was not enthusiastic about settling down in the New York or New Jersey area. He favored moving West, possibly to St. Louis, a more centralized location. Fr. Peil soon moved the community to Milton, a small town in central Pennsylvania. However, there were few Catholic there, and a disagreement with the local bishop regarding length of stay forced the community to look elsewhere.

Soon Wendelin went on another long journey to sell magazines, this time to Chicago. He spent the night at St. Boniface church (a German parish) and talked with Fr. Albert Evers, a diocesan priest. He shared his story about the search for a permanent location for the Society. Evers informed him that at Shermerville, just north of the city, a farm belonging to a German orphanage was for sale. On June 26, 1899, the Society of the Divine Word purchased the 340-acre Russell Farm for $42,000. The five-member community, including Brother Wendelin Meyer, moved in. It became the Society’s first permanent location in America. 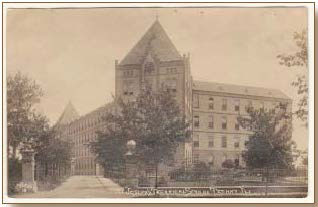 On January 27, 1906, the name “Techny” was given to the United States Post Office located on the Divine Word property. “Techny” is derived from the shortening of the word “Technical” taken from the name of the St. Joseph Technical School which opened there in 1901.