For now at least, I am the only Divine Word Missionary living and working in Uganda. On April 2, 2013, Pope Benedict XVI appointed me the apostolic nuncio (ambassador) to this east African country, after I exercised that office for over seven years in Benin and Togo.

Let me begin by describing something particular to the Church in Uganda. Its importance in Africa can be compared to the devotion to Our Lady of Guadalupe in Mexico and the Americas. What I refer to is the memory of the martyrs of Uganda, the twenty-two young Catholic men in the service of the King Mwanga. They died between December 1885 and May 1886. Some of their names are known even in the United States, such as Saints Charles Lwanga, Matthias Malumba, and Kizito. 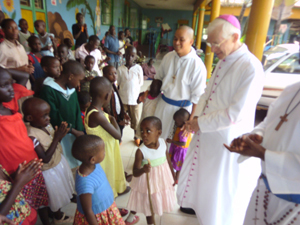 To these can be added two recently beatified young catechists from the north of the country, Blesseds Jildo Irwa and Daudi Okello, who died in October 1918. Together they give a powerful witness to the faith that once again confirms the ancient saying: “The blood of the martyrs is the seed of Christians.”

Equally striking is the witness of another twenty-two martyrs of the Anglican Communion, who died in the 1880s for the same reasons, principally, for resisting the advances of a ruler with a passion for power and young men. In 1964, at the canonization of the Catholics, Pope Paul VI explicitly praised the Anglican martyrs and even visited their shrine during the first trip of a pope to Africa in 1969. This is a unique grace, a rich “ecumenism of martyrdom” that continues to bear fruit today.

The annual pilgrimage for the martyrs’ feast on June 3 draws incredible numbers of people. The pilgrims come not only from Uganda but from neighboring countries and even from far off countries, such as the sixty people who flew in from Nigeria last June. Countless pilgrims travel long distances, often on foot, to arrive at the sanctuary of Namugongo, located north of the capital Kampala. Their sacrifices bear witness to an extraordinary faith that is a challenge for anyone from a more prosperous country.

What Pope Francis often repeats about mission on the “existential peripheries” of society becomes very important for Uganda as a whole, especially in the light of the missionary thrust of the last World Youth Day. Young people comprise over fifty percent of the population in Uganda, and one can sense the enthusiasm of the Catholics among them to evangelize and deepen their faith. Just recently, I celebrated Mass at the Uganda Martyrs Shrine for two groups, one from primary schools and, most recently, for youth of secondary school age. Here are the people with the energy and joy needed for bringing the gospel to their peers and to the nation as a whole! This is a sign of what Pope Benedict, during his visit to Africa, called “Africa a continent of hope.”

There are nineteen dioceses in Uganda. To come to know both the country and the Church, I have been visiting those dioceses. I have traveled to the south, north and west. Many more places are in my schedule for later this year and next year. Such visits are usually joyful experiences of coming to know a living faith and, at the same time, of encouraging brothers and sisters, including my brother bishops, and of strengthening communion between the particular Churches and the Holy See.

Something unique to the Church in Uganda is its high Catholic population of about forty percent, an extraordinary percentage in comparison to other countries. Slightly less numerous are members of the Church of Uganda (Anglican Communion). Besides various evangelical and “independent Churches,” there is also a small number of Ugandans who belong to the Orthodox Church of Uganda. Muslims are around ten percent of the total population.

Every new country means another adventure, and coming to know a country takes time. My last assignment in Benin and Togo included frequent contacts with other Divine Word Missionaries there. Here in Uganda, my closest confreres are in Nairobi, Kenya, a fifty-minute plane ride away. A bit more distant are the confreres in South Sudan, whose superior was kind enough to pay me a visit during a recent trip to Kampala.

Lastly, a few geographical comparisons may be useful. Uganda is bigger and more populous than Benin and Togo combined. Its total surface is 91,136 square miles and it has a population of about thirty-six million. Benin and Togo together occupy 64,779 square miles and have a combined population of about 16.8 million. The size means more miles to cover and longer times on the road. This is, however, part of the missionary life that continues whether the roads are good or not. What is important is that I am following our Lord, who leads the way, and that I invoke the Lord of the harvest to send laborers where they are needed.