Peace and Justice Work on the Amazon

Studying English at DWC for eight weeks in the summer seems like vacation for Fr. Jose Boeing, SVD. Identifying nouns, verbs and increasing his vocabulary is quite a change from his ministry in the Amazon Basin in Brazil where he ministers to the needs of indigenous people. A trained lawyer, he is on the front lines fighting outside forces who seek to exploit the rich natural resources there.

“Big companies come to the Amazon for mineral rights, cut the trees and to build big hydroelectric dams,” he said. “So, I help the people, the indigenous people, to protect their rights to the land.”

In addition to protecting the people and environment of the Amazon Basin, Fr. Jose is SVD Regional Superior for the Amazon and chairman of the executive committee for SVD PANAM Zone, which encompasses North and South America.

Fr. Jose came to Divine Word College for a special ESL program this summer. The program, which began last year, offers the ESL resources at DWC to SVDs south of the border and creates an opportunity for cultural exchange, communication and mutual understanding. Fr. Jose said acquiring a better grasp of English is important for him to communicate with SVDs in other countries.

“I need English because sometimes I have to read, write letters or conduct a meeting,” he said. “I speak Spanish, but don’t speak English, so the Chicago Province said, ‘If you have priests who don’t speak English, come to Divine Word College, we have a summer course.’” 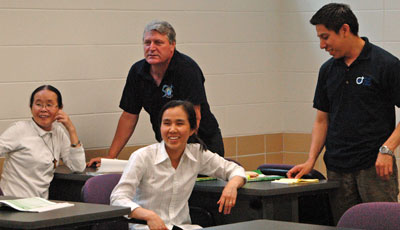 Fr. Jose’s home parish is in Santarem, in the state of Para, one of the oldest cities in the Brazilian Amazon. To visit the 35 priests in his region—each serving 50 to 60 mission stations—he often goes up the river by boat, otherwise traveling by bus or airplane.

“I travel 1600 kilometers to all parishes,” Fr. Jose said of the trip he makes three times per year. “I visit the confreres and people in the parishes on the Amazon River. There are many, many communities, so it is very long to travel.”

Born in Manoel Ribas, in the south of Brazil, on January 21, 1961, Fr. Jose was ordained in December, 1990, and assigned to the Amazon Region. In 1996, while still working in his parish, he entered University Tapajos, in Santarem where he studied law while also teaching philosophy. In 2000, he graduated with his law degree with the goal of educating indigenous people about their rights to the land, and to connect them to services offered by the government.

“Sometimes they don’t have a school, or don’t have medicine. It is the responsibility for the president and the government to help the people,” he said. “So my job is teaching the people, so they understand about their human rights.”

Those rights also pertain to the land. For many years, large international companies have sought to cut down the trees in the rainforest to plant crops. Others seek to mine the mineral resources or construct hydroelectric dams. Such projects would drastically impact the people of the Amazon, who may sign over their rights to the land, unaware of how such projects could affect their lives and the eco-system.

“So, I help the indigenous people and fisherman as well as migrant peasants who come to Amazonia - Brazil, work for strong human rights defense,” Fr. Jose said.

But for eight weeks this summer, all he has to concentrate on is improving his English-speaking skills.

“For me, the Divine Word College has a good program for English and I am very happy because I have time for study. There are many people, from Vietnam, Latin America, the older priests that live here, so I can understand the different situations,” he said. “It is very hard for me, but also very good, this time I am here.”