Church is Home to all People of God

Editor’s Note:Bishop Terry Steib, SVD, professed First Vows as a Divine Word Missionary in 1959 and was ordained to the priesthood in 1967.He was ordained as a bishop in 1984 and served as the Auxiliary Bishop of St. Louis before becoming the fourth Bishop of Memphis in 1993.He retired in 2016 and reflects below about the 50th anniversary of his ordination, which he celebrated last month.

As I transition from serving as the Ordinary of the Catholic Diocese of Memphis in Tennessee and as I move forward into the next chapter of my religious and spiritual life, I am reminded that January 6, 2017 is approaching. Apart from being the Solemnity of the Epiphany within the liturgical cycle of Christmas, this date is significant to me because fifty years ago – January 6, 1967 – I, along with six of my classmates, was ordained a priest within the charism of the Divine Word Missionaries in Bay St. Louis, MS.

To know that one has been in priestly ministry for fifty years is in itself overwhelming. “Has it been that long?” I think. Yes, it has! “Have I served God and community, ministered to Church and people of God all this time?” Yes, I have!

After his ordination on January 6, 1967, in Bay St. Louis, Bishop Steib remained there as Assistant Dean of Students at Divine Word Seminary from 1967-1969. He also served as professor, from 1967-1976, for the seminarians attending St. Stanislaus High School in Bay St. Louis. “I taught English, literature, religion, reading and speech,” says Bishop Steib, “helping the students to become young men who could think and discern God’s call for themselves.”

Bishop Steib served three terms as the Provincial Superior of Divine Word Missionaries, Southern Province, from 1976-1983. “Some of the challenges of this period involved making certain that we all worked as a team, seeing one another as real brothers,” says Bishop Steib. 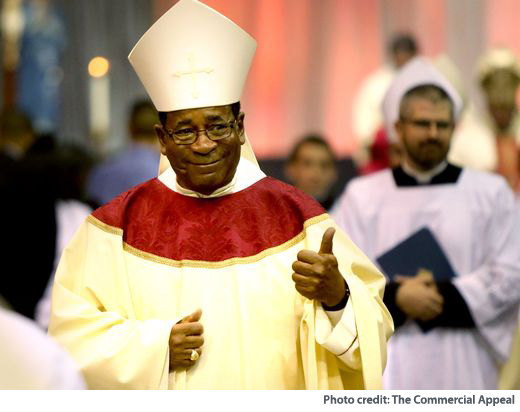 “We asked ourselves: ‘What is our mission in this part of the Lord’s vineyard?’” He was also elected Vice President of the Conference of Major Superiors of Men in the years from 1979 to 1983.

In 1984, he was ordained Auxiliary Bishop for the Archdiocese of St. Louis, Missouri, and was also Titular Bishop of Fallaba in St. Louis. “My ministry involved visiting all of the parishes, visiting students before their confirmations and interacting with all of the priests as we got to know one another,” Bishop Steib says. “Together, we worked with the seminary and theologate to move forward.”

He is a pioneer in a new ministry as well. In a pastoral letter from June of 2005, in This Far by Faith, Bishop Steib wrote: “To be sure that we do not leave anyone behind…to be sure that we promote genuine gratitude and reverence for the gift that each one of us is to the Church, we have begun to lay the foundations for a diocesan ministry with Catholic gay and lesbian persons.” Today, this remains an ongoing ministry, with monthly group meetings that have helped reconcile people with their families and the Church, fostering acceptance and love.

Reflecting on his experiences as an African American Bishop, he says, “An important challenge is to get our people in the Church to see the universality of church in all its cultural diversity, to look at and bless these differences and to see the beauty of one church and one family.” And being an SVD, Bishop Steib says, “means belonging to a community that values the cultural differences, accepts those differences and makes us missionaries of God’s Word.” 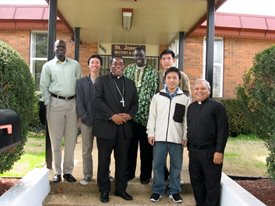 In discussing vocations for young African Americans, Bishop Steib feels that “for too long, we saw ourselves as servants of the people, without inviting them to join us.” In Memphis, he gathers pastors and interested young men at his residence for vocational discussions. “We share our stories and let them know that we were once like them, too. We try to open the door and help God along.”

Bishop Steib currently serves as a committee member for Hispanic Affairs, Evangelization and Conciliation and Arbitration. He is also Chairperson for Consecrated Life and serves as a member on the Board of Directors of the Catholic Extension Society. He stresses the importance of getting all clergy to work together, moving forward with the mission and vision of the diocese – educationally, socially and spiritually.

Looking ahead, Bishop Steib has set a new goal. “Based on depositions and legal cases, and after reading Matt Kelly’s book, Rediscovering Catholicism, I plan to research the question: Do people really know what Catholicism is all about?” He will write a series of pastoral letters, addressing Catholicism as a way of life, not just a fulfillment of obligations.

What advice does Bishop Steib offer to young men aspiring to missionary service? “Get in touch with an SVD,” he emphasizes, “to learn about the challenges of bringing the Gospel to others. Witness our SVD community for yourself – we are made up of so many different cultures. We speak loudly and clearly about who we are.”

When asked about his motto, “The Lord is My Light,” Bishop Steib says, “I liken it to being a running back in football, inspired by Coach Vince Lombardi. You run to daylight – you find a way, a light, to get through the line. I keep my eye on the prize. The Lord is my Light – whom should I fear?”