Before we were called "Fu Jen University," our name was "Fu Jen Academy." The year was 1925, and that name lasted 2 years. The Academy quickly developed its curricula, the size of its student body, and the nature and size of its faculty. That pre-university educational institute expanded then in 1927 to become a full scale university with several hundred students, male and female, scholars from around the world, and scores of local Chinese intellectuals serving as teachers. We are indebted still today to the Catholic religious order of men known as the Benedictines, specifically the Benedictine community at St. Vincent Archabbey in Latrobe, Pennsylvania, for responding to the plea of Pope Pius XI in 1925 to first establish and staff what was to become the first Catholic university in all of China. 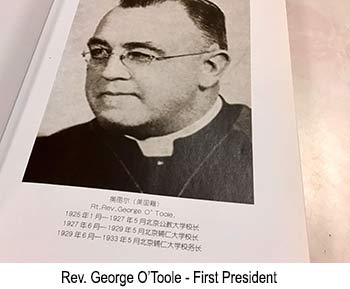 Sadly, the Great Depression intervened to make it financially impossible for the Benedictines to continue their efforts. Eight years after its founding, in 1933, Pope Pius XI turned to the Society of the Divine Word (SVD) for assistance. "Is it possible for your men to take over administration of this noble endeavor?" he asked the superior general of the SVD. "Fu Jen is the only Catholic university we've got over there in that great big country. I hate the thought of closing it down."

The Holy Father knew of the dedication of the Divine Word Missionaries to higher education for its members. Our religious order was still very young, having only been founded some 50 years earlier, but we were growing, and had missionaries in China out in the countryside, preaching the Gospel and engaged in parish work. In addition, in the spirit of our Founder Father Arnold Janssen, among ourselves we quietly considered China our "first love." In the 1930s, despite unsettling rumors of war in Europe and the Depression, the Divine Word Missionaries appeared to have a leg up in the education ministry. Before he founded our order, St. Arnold Janssen had encouraged our members early on to seek university and graduate degrees. He raised funds to pay for the necessary tuition. Such academic preparations, he thought, might one day be useful for scholarly work in anthropology and other fields in social science useful to the missionary cause. He never could have predicted that his foresight laid the groundwork for SVDs with doctorates and the equivalent of master's degrees so necessary to staff a young university in a time of crisis. Such was the case of the popularly known "Catholic University in Peking," whose official name was Fu Jen University.

Thus, as the Benedictines regretfully let go of their mission at Fu Jen in Peking, with some fear and trembling, the SVD picked up the reins for the administration and some of the teaching at the fledging university.

From Rome, the superior general of the SVD directed that Divine Word Missionaries all over the world keep Fu Jen University in Peking in mind as they embarked on the important yet challenging ministry among Chinese university students and their professors. At the same time, he worked with the superiors of our "sister order," the Sisters, Servants of the Holy Spirit (SSpS, also known as the Holy Spirit Sisters), to encourage Sisters to serve beside the SVD in all facets at Fu Jen. In addition to responsibilities as office holders and professors, he requested that the Sisters put special emphasis on the care of women students in dormitories, and programs for their particular needs. 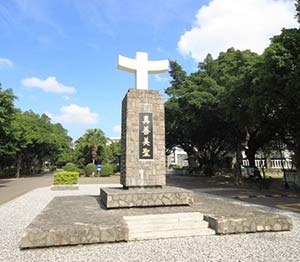 The school withstood the discomforts of the transition and, in the years that followed, the harsh sufferings of war, first with the invasions of the Japanese armies, and later the battles between the military forces of the Chinese Communists, led by Mao Tse-Dong, and the Chinese Nationalist armies of Chiang Kai-shek. When Mao's forces prevailed in the closing of the 1940s, the government of the Republic of China, along with Chiang and some 20,000 of his soldiers, fled to the island of Taiwan.

Back in the mainland, in the new People's Republic of China, private schools, especially those affiliated with foreign religious groups, were pressured into a process of nationalization. Foreign missionaries were expelled from the country. The acting president (called "rector") of Fu Jen University, an American SVD priest from Chicago by the name of Harold Rigney, was arrested, charged with espionage, and thrown in prison.

The fate of Fu Jen, which had flourished for some 25 years and become known around the Catholic world, appeared to have ground to a cruel and sudden halt. The university was closed down. Its facilities, professors and students were placed under the direction of public authorities.

Again Rome turned to the Society of the Divine Word for assistance. The SVDs had suffered great pain in their earlier loss of Fu Jen in the opening months and years of the new government in Beijing, but had the benefit of that tradition for service to higher education in which Father Janssen and so many other of its members believed. As World War II ended, a new time of sunshine seemed to beckon with new opportunities in other parts of Asia. Notably, in 1949, the SVD sent missionary professors and personnel to Nagoya, Japan, for example, for Nanzan University. The same year saw Divine Word Missionaries assigned to Cebu City, the Philippines, at San Carlos University. Earlier, in 1947, SVD began academic commitments at Tagbilaran City in the Philippines, at Holy Name University. 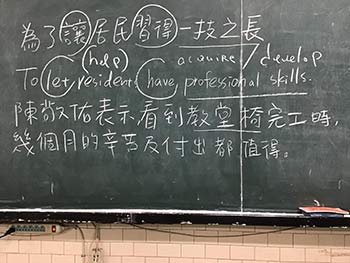 By 1961, Vatican officials working with Pope John XXIII, were ready to gather leaders from the SVD, the Society of Jesus (Jesuits), and the Chinese Catholic Bishops' Conference in Taiwan to discuss the possibility of re-establishing Fu Jen University in Taiwan, the Republic of China.

1963 saw the opening of the new Fu Jen University in Xinchuang, an industrialized suburb of Taipei. The Society of the Divine Word did not re-establish Fu Jen alone. Jesuits from around the world, a smattering of Benedictines from Latrobe, Pennsylvania, and the Chinese diocesan clergy responded to the call to service. The Jesuits administered the colleges and departments of social science, law, and business. They also established a seminary neighboring the Fu Jen campus to train clergy and laity for leadership in the local church. The local diocesan bishops supplied priests for the College of Humanities with departments that included philosophy, art, and history. The SVD drew members from around the globe to serve in the College of Science and Engineering, the College of Languages and Literature, and their related departments of Physics, Chemistry, English, German, Spanish and so on.

Today the resources of the SVD, the Jesuits and our local clergy are no longer sufficient to match the demands of this burgeoning campus, which grew from a student population of 10,000 when I first taught here in the late 1970s to its current population of 25,000. Administrative structures have changed greatly in the past 20 years. Administration of the university as a whole has in recent years been entrusted to the capable hands of our lay colleagues. The work of our religious orders and local clergy continues unabated, but there are far fewer of us now in positions of authority and in the classrooms with professor to student contact. Nevertheless, we are proud of our members serving at this time at Fu Jen as administrators, and as both full- and part-time professors. 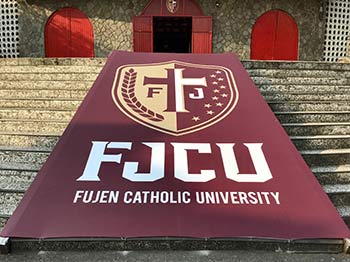 We are happy to be a living sign of the Gospel proclamation that Jesus Christ has come for the whole world. For in fact, we have almost the whole world among us. We come from the Netherlands, Poland, Germany, Italy, Chile, the United States, India, the Philippines, China, and Taiwan itself to continue the SVD story at Fu Jen. We serve with happy memories of the past, and hopes that, with God's blessing, we may continue for years to come.

About the author: Fr. Dan Bauer, SVD is an American Divine Word Missionary who has worked at Fu Jen University for 35 years. He has a Ph.D. in Comparative Literature and has taught a variety of courses throughout his career.