Deep in the Bolivian jungle—after questioning him for hours to make sure he could be trusted—elders of the Moxo and Chiquito Indian tribes revealed to musicologist Fr. Piotr Nawrot, SVD, hundreds of centuries-old, Baroque-music manuscripts, many of which had been created by their ancestors.

“I knew my life would change forever,” he said prior to conducting a concert of this rare music in the Main Chapel of Divine Word College, on Friday, April 24, 2015. The performance was part of DWC’s 50th Anniversary events.

“I knew that the rest of my life would be dedicated to not only studying this music, but to its performance,” he said. “This music must come back and be part of liturgy, concerts and the teaching of the history of music.”

What was revealed to him in 1991 was an experience that was repeated twice more, totaling 13,000 pages of unique music, dating back to the 17th and 18th centuries, when Jesuit missionaries wrote it as a means of conversion. They also encouraged the Native Americans to create their own music, written in their own language and performed on their own handcrafted instruments, including violins.

After more than twenty-five years of painstaking reconstruction work by Fr. Nawrot and a host of expert volunteers, 36 volumes of this treasure have been published, and selections have been performed in concerts around the world and recorded on CDs.

Compared to the solemn and contemplative “Spanish Cathedral” Baroque music of the time, this is bright and joyful. It is not simply Baroque; it is “Mission Baroque,” according to Fr. Nawrot. 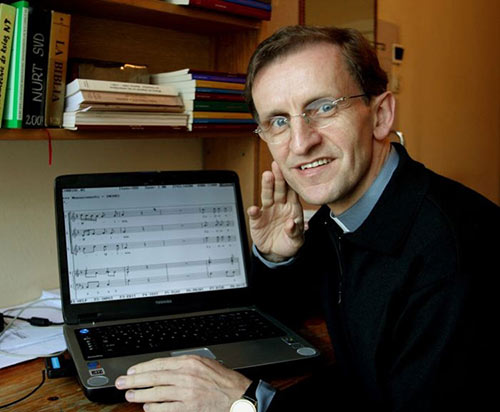 For Fr. Nawrot, this all began with a rumor.

Born in Poland, where he developed his love of music through his family and early education, he joined the Divine Word Missionaries in 1974 and was ordained in 1981. He was first assigned to Paraguay.

He became interested in the Spanish, or Jesuit, Reductions of the late 17th and early 18th centuries, when the Native American tribes were consolidated into small, densely populated communities, organized by the missionaries.

Fr. Nawrot noted that in Paraguay, there were examples of reduction-era art and architecture, but no music, which most believed had long since been lost.

In 1986, he enrolled in Catholic University of America, in Washington, D.C. where he earned a master’s in music followed by a doctorate in musicology. During his research, he read about Native Americans in Bolivia singing in Latin. Needing a subject for his dissertation, he decided to investigate, on site, in Bolivia.

Traveling several days into the jungle, he arrived at a village he believed could contain a trace of reduction-era music. Before the tribal leaders would reveal their treasure—which they revered as much as other Catholics do the Blessed Sacrament—they wanted to know who this guy was.

“This was about faith and you have to be a person they could trust,” Fr. Nawrot said. “It was inconceivable to them that this music could be appreciated by someone who reduces music only to melody, harmony and rhythm.”

What they revealed to him was stunning. Hundreds of manuscripts—chants, masses, hymns, operas with texts in Indian languages, and more—all of which had made an incredible journey through time. 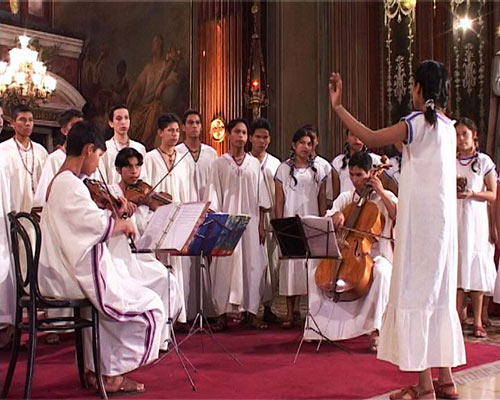 After the Jesuits were ordered out of the country, many of the communities continued. Some of the Native Americans treasured their music, others let it deteriorate. In the early 1900s, when the government tried to relocate them to be used for factory labor, many fled into the jungle.

“They left everything behind, but they took this music and their violins,” Fr. Nawrot said. “It is absolutely remarkable.”

Often performed in the villages, the music nonetheless was damaged over time. Now, for more than a quarter century, it has been the focus of a painstaking reconstruction effort.

“This music has been performed all over the world, so it is absolutely universal music, and a significant contribution to ‘Baroque’ music,” Fr. Nawrot said. “It has a power to convert the people, to praise God, to build Christian community, to make us feel good and at peace.”

His life changed in the jungle that day in 1991 and Fr. Piotr Nawrot has, in turn, helped change the world of Baroque music.