Getting Real in Guadalajara

Senior Brian Junkes and sophomore Tomerot Lambert left for Guadalajara on May 20. Staying a Divine Word Missionary residence, they took the equivalent of two semesters of Spanish at a Jesuit university. Their days began and ended with community prayer sandwiched around meals, classes, studying, cleaning duties, sports and time to explore the area before spending their last two weeks touring Mexico City.

Junkes saw the trip as a test of his ability to learn. Born with a speech-language learning disability, he wanted to find out if he could be a missionary in a country where he would have to learn another language.

“After I came back, I took some time to think about it and wow, I can speak some Spanish, not fluently, but enough to express myself,” he said. “I did all this in two months. Imagine if I was there for a year.”

Tomerot’s easy-going nature saw the trip as a vacation blended with spiritual discernment. His laid-back approach didn’t always sit well with his more studious colleague. Praying constantly, Tomerot sought the presence of God, hoping for guidance. Then it came through the revelation that God’s presence could be found in his fellow seminarian. 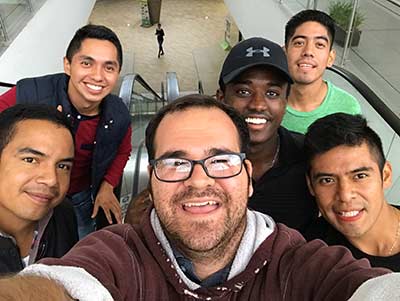 “Something beautiful happened and I was able to respect Brian and what he wanted to do with his life,” Tomerot said. “I could see him as a gift to me, to help me understand myself and what I want to do in the future.”

Returning, both young men said their call to religious life is even stronger.

“Yes, I can do this,” Brian said. “I really want to continue on with the SVD.”

“Through this enlightenment, I realized that I want to be more serious,” Tomerot said, “and I sense that I really do want to be an SVD priest."