Work with refugees and migrants is our mission

Twenty years ago, Fr. Patrick Kofi Kodom, SVD, traveled to Austria as the first African Divine Word Missionary to be assigned for missionary work in Europe. In those 20 years, Fr. Kodom became a pioneer and trailblazer for pastoral work with refugees and migrants in Austria. At the end of December 2020, he returned to his homeland of Ghana, West Africa. 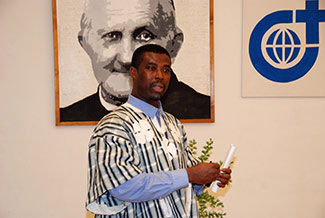 What it means to be black in Austria

Fr. Patrick followed the insertion process into the reality of Austria, including language studies in Vienna. The warm welcome by his Divine Word Missionary confreres in St. Gabriel cushioned a little of the "culture shock." He went through the experience—often painful—of what it means to be black in Austria. He moved around intentionally in civilian clothes. To people, including the police, he was a black man. He noticed that he was always the only one being singled out for checking. In the Austrian police's eyes, as a black African, he was suspected of drug dealing.

During an internship in a steel factory, always incognito, he lost his job after only three days, officially because of his lack of German language skills. However, an inquiry revealed that his shift group did not want to work with a "black man." He changed departments and thus was able to continue. When his identity as a religious priest became known, things changed. But, as Fr. Patrick stated in retrospect, he repeatedly experienced that, as an African, he was often accepted only because of his role as a priest, "but not as a human being."

Initiative for the pastoral care of refugees

After two years working as an assistant priest in a parish in Innsbruck, he returned to St. Gabriel to begin his work in pastoral care for refugees. At first, he accompanied new arrivals in the refugee camp in Traiskirchen and helped them with their first orientation.

Soon he established contact with refugees in detention pending deportation. There were church services in the detention center, but no personal counseling. Together with a civil association, Fr. Patrick succeeded in convincing the Auxiliary Bishop in charge and the police chief to establish a separate chaplaincy for people in detention pending deportation. On November 1, 2008, Fr. Patrick officially began his work as a chaplain in Vienna's two police detention centers.

His language skills (German, English, French, and the African languages Swahili and Twi) helped him in his conversations with the detainees. He listened, gave encouragement, established contact with the families, and arranged legal counsel. And he prayed with them. He had the Bible and the Koran with him.

The work took much energy because, as the chaplain, he saw despair and hopelessness, hunger strikes, and suicide attempts. When a successor was found for the ministry he had built, Fr. Patrick went to Rome to study pastoral theology to focus on refugee/migrant pastoral care. 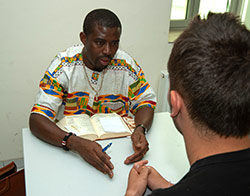 In 2015, Fr. Patrick returned to Austria, this time to the Divine Word Missionaries community in Dornbirn (Vorarlberg). The diocese of Feldkirch appointed him as the first refugee and migrant chaplain in Vorarlberg. Fr. Patrick visited refugee shelters, talked to people about their fears and burdens. He paid particular attention to the unaccompanied juvenile refugees. In visits to schools, discussion events, and lectures, he tried to break down prejudices against refugees.

After nearly twenty years of missionary work in Europe, Fr. Patrick returned to Ghana at the end of 2020. As he moves back to the African continent, ten Divine Word Missionary African confreres are already working in Europe. In Ghana, he will probably be active in the formation of young missionaries. His experiences will help the Divine Word Missionaries in Africa who plan to go to Europe as missionaries in the future.