"Oh God, please give these children something to eat… I will do anything.” I cried in my heart as I watched the growing number of children being asked to leave the line to get food because they had no ticket. The problem was that I could not do anything. I was helpless. I was angry that I could not do anything. My journey in Ecuador would ultimately summit in the experience of watching the poorest of the poor people begging for food. I am still in shock, and I am still trying to make sense of my experiences of working with the poor in Esmeraldas and Capilla de San Antonio, in Ecuador.

Having lived in Quito for almost a year and a half, I did not see too many hungry people. I’d seen some people sleeping in the street because they were drunk, but not homeless people. From my observation, I thought Ecuador was a second-world country. It is not yet first-world due to the lack of social infrastructures, but not third-world because everyone seemed to have at least a house. It was with this observation that was I assigned to the province of Esmeraldas.

Fr. Ferdinando Seran, SVD, the parish priest of Holy Family, took me to Esmeraldas. I was thankful because I had two large suitcases which would be difficult for me to take along if I were to take an interprovincial bus to Esmeraldas. Along the way, he told me what I would be doing and gave me a lot of historical background regarding the people. I’ve learned that our parish is one of the poorest parishes in the city, if not the poorest. We are responsible for around half a dozen chapels, called capillas in Spanish. Two of them happen to be on two islands in the middle of the great Río Esmeraldas.

It took me a few days to get settled into the parish before I got a chance to visit the many chapels for which we are responsible. Most of the chapels needed major repairs. I still remember vividly the visit to Capilla de San Antonio on La Isla Grande. We parked a little bit outside the chapel. The path to the chapel was full of dried, cracked mud. We were supposed to celebrate Mass. Upon entering the chapel, I was instantly bitten by a dozen mosquitoes. I wondered how people here protect themselves from mosquitoes. Common in this area are several mosquito-borne diseases, including malaria, dengue, chikungunya, and Zika. There were two religious sisters and three lay women waiting for us. They were discussing the flood that had occurred here two weeks before. Water from the river had flooded the chapel and surrounding area by around three feet. It brought in a lot of silt into the chapel and the only classroom in the back. The women of the parish had been cleaning the chapels since then, but it was difficult without running water. One of the women broke down in tears. 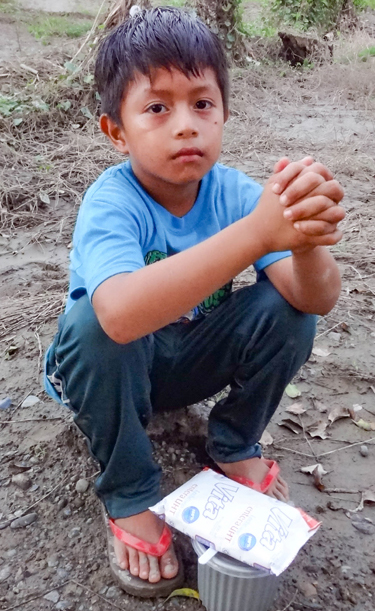 The poorest of the poor

I soon learned that the people on the two islands were the poorest in all of Esmeraldas. Until recently, the large island did not even have a paved road. Now there is one that connects the island with the rest of the city. The little island still does not have roads. It has a dilapidated suspension bridge for people to go between the islands. Most of the people on the islands were poor before the flood, and many became destitute after the flood. Most of what they have is damaged or destroyed whenever the river rises. The river has been bridging the bank quite a lot recently. It is not a matter of asking why they did not move out, but why they all stayed. The answer is that they are too poor and can’t move out. With no money, it is difficult to find a better life. And so, the people stay on the island, not by choice but because they have nowhere else to go.

With low prospects for employment, high availability of illegal drugs, domestic violence, and crime, the people there are locked in a cycle of perpetual poverty of which they are unable to get out. With no money to buy food, I often wonder how they were able to put food on the table or make ends meet. This is where the information from Fr. Ferdinando came back to me. Most people resort to stealing from one another to get money. Unfortunately, when they find money through whatever means, the majority often buys drug instead of food due to the abundance and low prices of the former.

I was invited to go to the Capilla de San Antonio to help a group of lay people set up for Eucharistic adoration and to help pass out food. It was just a couple of days after my first visit there. The mud was still drying from the last flood, but the chapel was clean. The people of both islands were invited to come to pray, eat and receive a small bag of “víveres” or cooking ingredients courtesy of the “Christ in the streets” lay group. Because more people came than the amount of food that was brought, three religious sisters and several lay women were busy making tickets to hand out. It was given on a first come, first serve basis. Soon the chapel was jam packed with people. All the tickets were given out, yet, more and more people came. Word had got around about this event to other communities.

The afternoon began with songs, and then the Blessed Eucharist was exposed for the people. From young to old, everyone was on their knees on the hard wooden benches or the concrete floor. There was no padding. The people sang and prayed. It was for me a very moving experience. When adoration finished, the people were introduced to the different groups and ministries in the parish. Several crates of food were brought in afterward.

Everything was orderly until it was time to pass out the food. People from the back immediately went forward to line up to get food. People in front were pushing into the line since they thought they would get food first. There were a lot of angry people shouting, yelling and pushing at each other. I thought that there was going to be a big fight. In the middle of all of this were a lot of young children and close to them, the elderly. None of the people would listen to directions. When the religious sisters were tired of yelling instructions, the priest, and lay leaders tried to keep people calm, but to no avail. I don’t blame the people in any way though. They know that there was not enough food for everyone, so they wanted to make sure they got their portion. 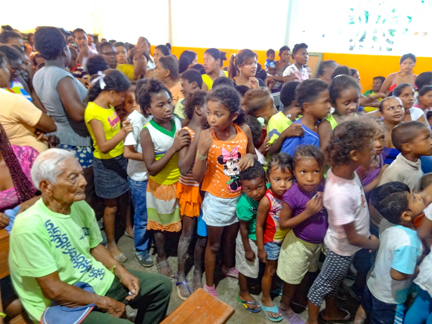 It took a good half an hour before order was restored. All the people were asked to leave the chapel and women and children would be the first to be given food, if they had tickets. Even then, when the line with the children formed, the children did not budge, and every other child tried to squeeze in. It was a sad sight to see the children fighting for food. I saw all the little ones being squeezed together like sardines as more and more children tried to cut into the line.

Soon the line was moving; thanks be to God! The children were given a small container of food and a small sack of milk. The small container held rice, chicken and some sauce. Those without tickets were not given food but were asked to stand on one side of the chapel, the side closest to where I was standing. I was heartbroken. These unticketed children are very skinny and could use some nourishment. They came late with their family, so there were no more tickets for them. They stared at the food as it was passed out to others with tickets.

At one point, a mother with a tiny child in her arm came up to get food. She did not have a ticket for herself or her little child. She pleaded for some food for her child but was asked several times to stay aside. If she got food, it would mean those with a ticket would not get theirs.

I was crying in my heart as the group of children without tickets grew. Their eyes looked longingly at the food that was passed out. I was praying deep in my heart, “Please God, oh please God… give these children something. Anything. I have given up everything and followed you. With the money I earned from my job, I could have fed all these people. But I gave that up too to follow you… and now I see this.

Why God? Why? Why must the children, the elderly, and the mothers go hungry?” I really wished I could satisfy their hunger. I was relieved that a decision was made to give food to all children and the elderly, regardless whether they had tickets or not. Thanks be to God! The religious sisters and volunteers continued to pass out the food as I left the chapel. All around me were children hungrily eating their food. Everyone with food was eating. At least the people now have something to fill their stomach for another day. I often think of the words that Mother Teresa said about the poor, “They are Jesus. Everyone is Jesus in a distressing disguise.” 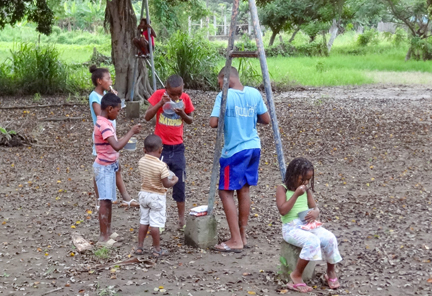 Deacon Benjamin Le, SVD, is originally from Vietnam and immigrated to the USA with his family. After earning a bachelor degree in computer science from the University of California—San Diego and working as a professional photographer and computer engineer, he joined the Associate Student Formation Program for the Divine Word Missionaries. Ben professed First Vows as a Divine Word Missionaries in August 2012 and Perpetual Vows in September 2017. He was ordained to the transitional diaconate in October 2017 and will be ordained to the priesthood in May 2018. During his years of formation, he participated in the Cross-Cultural Training Program (CTP) and served two years in Ecuador.