"With time and God’s grace, we hope that this community football tournament will call home the Holy Rosary field of dreams!"

As a boy growing up on a farm, my siblings and I had a huge lawn to play on, and green grass surrounded our home. We often placed four blocks of wood in an alfalfa field to make our baseball diamond. These fond memories are a far cry from the conditions in which the children of the inner-city parish of Holy Rosary in Kingston, Jamaica, have to live. There is no grass, and if they want to play football (American soccer), they arrange stones in the middle of a seldom-traveled road to make goal posts.

An abandoned field across the street from the church was formerly the site of two boarding houses for young boys. The buildings were torn down years ago, but the foundations remained and an old tree clung to life nearby. The area became a dumping ground for people in the area, but the field was ideal for a football field.

In February 2016, with community support and contributions from local businesses, we began to tear out the two foundations, removed the tree and stump, and took load after load of rocks and rubbish to the city dump. It took three years to clear the debris and put an end to the field being used as the local dump for the community.

Next we had the field graded. This transformed the forty-by-ninety-foot lot into a level playing field. During this process, the grader hit a cap covering an old, stoned sewer pit. This was not part of our plan. In fact, it became a major setback to our time line and our completion date. We had no choice but to tear out the top portion of the pit and fill it in.

Once completed, we returned to our plan of planting grass seed. Using a homemade drill of ply board with six rakes bolted together and weighed down with rocks, we tilled the soil and planted the seeds. We have six hundred school children plus the parishioners praying for rain. When our prayers are answered, we celebrate that nature blesses our efforts! When not, then we haul water in the back of the SUV. I drive a six-foot, homemade water dispenser that sprinkles water from a nearby pool.

Next we want to build bleachers, where fans can watch the games, and to install a permanent water system so that the field will become a lasting reality. Already we are in negotiations with the police and participate in a crime prevention program, which encourages the youth to play football. Holy Rosary parish has a team in the tournament, currently played on an abandoned, asphalt basketball court. With time and God’s grace, we hope that this community football tournament will call home the Holy Rosary field of dreams!

Bro. Bernie Spitzley, SVD, is from Westphalia, Michigan.He professed first vows as a Divine Word Missionary in 1975 and worked for many years in formation at Divine Word College and in brother formation at Wendelin House in Washington, DC.In August 1999, Bro. Bernie began is ministry in Jamaica and most recently was named administrator of Holy rosary Parish in Kingston, Jamaica, in August 2012.

Used with permission from the Divine Word Mission Office in Techny, Ill. 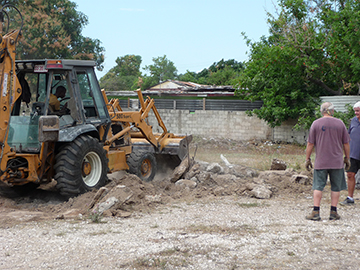 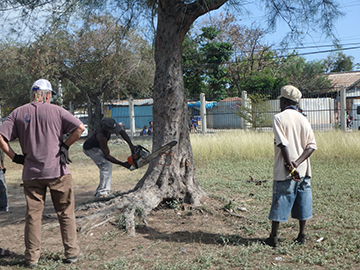 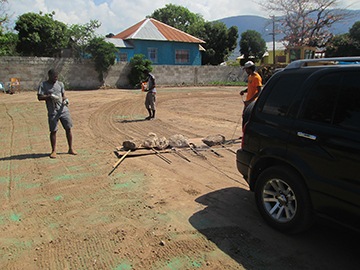