Ministering in the Witch Camps of Northern Ghana

Editor’s Note: Asuncion Vazquez, SVD, is a Divine Word Missionary Seminarian originally from Paraguay. He completed his initial formation in Argentina. Prior to Perpetual Vows, all Divine Word Missionaries complete a one to three year program entitled Cross-Cultural Training Program (CTP). Asuncion chose to complete his year of missionary practicum in Ghana, West Africa. Prior to his ministry in Ghana, he needed to learn English. Asuncion studied English at Divine Word College in Epworth, Iowa, from January 2012 to December 2012. After his ministry in Ghana, he will return to Argentina to complete his preparation for ordination to the priesthood, possibly in 2016. Please keep him and all Divine Word Missionaries in your prayers, particularly those in their CTP experience.

I minister in the Northern Region of Ghana, West Africa. In this region, plenty of women are accused of being witches. They are often beaten and insulted and expelled from their communities and families. In many places, the Catholic Church, and especially the Divine Word Missionaries, is helping them by providing for small mud houses, drinkable water and light. These are all possible in thanks to donations from abroad. These women are living in places called “witch camps.” Unfortunately, these accusations continue even in today’s society. I want to share with you one of these sad and cruel stories.

On the day I wrote this story, some other missionaries and I met with some of the women in one of the so called “witch camps.” The sad story I share is one of a woman called Gazia Uawam.

Gazia is from Nawurugu, a village of the Komba tribe. She does not know her age and she never had the chance to attend school. She was living a quiet life as a village woman. She was the first wife of a man who had two wives (here in Ghana, men often marry more than one wife). She told us that she gave birth to 11 children, but 6 died. Sadly, many babies do not survive long after birth. Gazia worked in the market and bought and sold food and other goods. She was able to earn enough to take care of her family.

One day Gazia decided to buy a goat for her younger brother’s child, her nephew. Gazia’s newphew had two wives. The child receiving the goat was from the first wife. A problem arose when her nephew’s second wife got angry at Gazia for giving the gift to a child of the first wife.

Some time later, Gazia’s husband went “crazy” and left the family. No one knew where he went or what happened to him. His second wife, Gazia’s co-wife, left the family to live with another man, leaving her children with Gazia. Gazia had her own children and now the children of her “co-wife” and she had no means to keep a job and care for all the children. 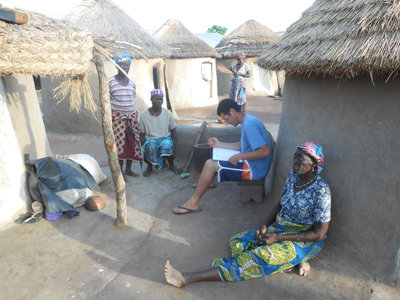 Problems began to increase for Gazia when her nephew’s goat started to have babies. Gazia took some of the baby goats to sell so that she could buy some food for her all her children. Now her nephew and his family became angry with Gazia and the troubles for Gazia continued to mount. The situation for her intensified a little while later when her nephew got bit by a snake and later died.

Now, the rumors and accusations began. Gazia’s was accused of being a witch. She was responsible for her nephew’s death. It was her fault that six of her children died. It was because she was a witch that her husband went “crazy” and left her—that she ended up with her “co-wife’s” children.

All the rumors and accusations were enough for other members of the village to support the accusations. Since most people believe in witchcraft, it is easy to convince others that someone is a witch, especially if sad things happen in their life. People think witchcraft was the cause of unfortunate circumstances.

One day people beat her hard, almost until death, and then took her to the local police: they said they weren’t able to solve the situation and that she should go to the Chief, which is the traditional authority, we could say as a king. In the chief’s palace everybody, including her family, accused her of being a witch, so that the chief decided to let Gazia touch a chicken. If she is really a witch, the animal will become crazy (this is one of the traditional ways used to determine whether someone is or is not a witch or a wizard).

All the people at the Chief’s palace were claiming they witnessed her witchcraft, so further proof was notnecessary. The Chief could do nothing but leave Gazia in his place. He asked her to share her room with three other women accused of being witches (the house is actually a room in which is difficult to sleep more than one person). After one week, the other women complained to the Chief that the room was too small for four people. The Chief decided to send Gazia to one of the “witch camp.” Today, 32 women are living in the witch camp we visited, but the numbers continue to increase. Gazia has been living here for 12 years.

Gazia is just one example of the many women accused of witchcraft and who live in the “witch camps.” She was never able to prove her innocence. She lives with saddness and pain. Today she shared her story with me. I will never forget her or the many other women like her in the Northern Region of Ghana. We must pray for her and continue to let her know that she is loved and is a child of God.