". . .when I engage in the ICN program, I was able to see for myself that there are so many other people who seriously consider this religious way of life as their life’s commitment. That is helping me confirm my vocation and strengthen my call.”

You might say that it’s an exercise in flexibility. No, it’s not a yoga class.

For a young man or woman deciding their commitment to religious life, the Intercommunity Novitiate (ICN) program, is an exercise in flexible thinking—and a chance to find out that they are not walking alone on the path of discernment. ICN programs can be found around the country, bringing together novices and directors from different religious congregations during the novitiate year. At Techny, the location for the Divine Word Missionaries’ novitiate in the Northern Suburbs of Chicago, the weekly ICN meetings have been held on Tuesdays for the last several years. Congregations in the Chicago area as well as in Wisconsin, Indiana and Iowa come to hear top-flight speakers and discuss issues related to religious life. During the 2009-2010 academic year, approximately 40 novices and 25 directors took part.

“Every time I go to an ICN meeting or conference, I tell myself to be open and to be flexible. It’s a great opportunity to learn from people, learn from their perspective,” said Huy Tran, who is completing his Novitiate year at Techny and will take his first vows as an SVD in August.

“It has been a really marvelous experience, really one of the highlights of the novitiate year,” said Bro. Rodney Bowers, SVD, Huy’s Novice Master.

The ICN meetings are held at the Divine Word International Conference Center. Essentially a workshop, they typically go from 9am to 2:30 or 3:00pm, and feature noted presenters—people like Michael Crosby, OFMCap; Lynn Levo, CSJ; Don Senior, CP; and Tony Gittins, CSSP. Besides the weekly meetings and interspersed throughout the year are four, three-day conferences which are held at the Siena Retreat Center in Racine, Wisconsin.

“CTU (Catholic Theological Union) and Loyola University have shared top notch theological thinkers and speakers that engage and challenge the minds of those considering this lifestyle,” said Sr. Julie Marsh, PBVM, formation director at the Presentation Sisters’ motherhouse in Dubuque, Iowa. She noted that the discussions are only a part of the total experience. “Friendships between the novices continue long after the program is over. The male and female interactions as future Church leaders give me hope that healthy ministry together is possible.”

Fundamentally, the eight-month experience exposes novices to a host of cultural differences and personal perspectives.

“You’d be amazed how many languages the group speaks. So many different people, so many personal perspectives that they put on the table,” Huy said—invaluable experience for a young man seriously contemplating the life of a missionary in the SVD, an order that respects the diversity of other cultures. 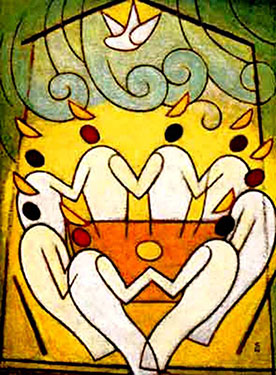 SVD missionaries work around the world with people of different faiths, vastly different cultural traditions, and most certainly different views of the world. The ICN program gives novices a chance to stretch their minds and practice the art of open-mindedness.

Sr. Julie and novice, Sr. Elizabeth Guiliani, PBVM, made the trip each week to the ICN meetings in Chicago this past academic year. The three-and-a-half hour drive each way gave them valuable time to talk, especially on the return trip, when they would enjoy a “debriefing” after each meeting.

“The program has been a great means of support to me as a formation director,” Sr. Julie said. “The coming together of other religious communities—men and women—from all over the world, brings a richness virtually impossible for me to recreate in Dubuque.”

Sr. Elizabeth said that for nine months the novices became more than classmates. They formed a small community of their own.

“We prayed together, shared Liturgy together and spoke of our struggles, hopes and dreams together. It’s a very special grace to have companions on the journey with you when you are only one entering from a community,” she said. “This was a life-giving experience for me, which allowed me to participate in the global Church, an experience I will think of many times over the years to come.”

There is also the incalculable value of the shared experience created by the program. Novices contemplating life in a particular religious community typically are few in number, which can leave them with the impression that few are choosing this way of life. Huy is one of four novices at Techny.

“But when I engage in the ICN program, I was able to see for myself that there are so many other people who seriously consider this religious way of life as their life’s commitment,” he said. “That is helping me confirm my vocation and strengthen my call.”