Forty-Six Years with the People of PNG

Brother Larry Kieffer, SVD, grew up on a farm during the Great Depression and served in the U.S. military before answering the call to religious life as a Divine Word Missionary. In 1970, he went on mission to Papua New Guinea, just north of Australia, where he spent the next 46 years managing plantations and producing coconut and cocoa for worldwide markets, the profits of which supported the missions and the local church. Over the years, his life was enriched by kind people, healthy living and a lifestyle that was vastly different from the one he knew.

“It was a great experience, living in a different culture with very friendly people, seeing how they live, I always enjoyed their company,” he said. “Many of the workers came from villages in rural areas and the plantation was a way for them to earn money. I saw it as my vocation to help them.”

Born in 1935 in Bellevue, Iowa, he worked on the family farm and later in a nearby machine shop when he was drafted into the U.S. Army in 1958. Serving two years in Germany, he always found time to attend Mass.

“There were some pamphlets and I saw advertising about the SVD brothers and the fathers, and I was interested,” he said. “But I thought I better be a brother because I felt I was better at the skilled trades.” 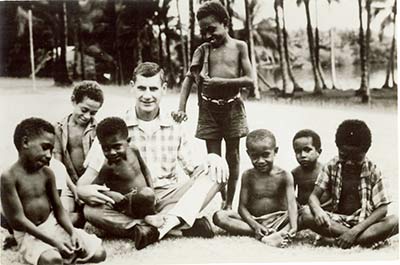 After his discharge in 1960, he entered the SVD major seminary at Techny, Illinois, where he took Final Vows in 1969. Assigned the next year to Papua New Guinea, he took a few months to study the language before taking on the duties of managing a small plantation.

“I supervised the entire operation, taking care of the workers, their pay and selling their produce at the local buying points,” he said. “In general, I looked after all the activities of the plantation.”

Eventually, he became the general manager of five plantations, all producing coconut and cocoa. The two crop species exist well together. The tall coconut palms create the shade in which cocoa plants thrive.

Rising early, his day began with Mass and breakfast and then it was off to the plantation to meet the workers at 6:30 a.m. Work begin work at 7 a.m. and went until noon. After an hour lunch break, they would work another two to three hours in the afternoon. For some jobs, workers preferred a “work mark,” a line that showed what they needed to get done for the day and then they could go home.

The climate had a big impact on the workers. Located near the equator, Papua New Guinea is hot, humid and rainy year around.

“It’s a tropical country and to work steady all the time is very difficult for them,” Bro. Larry said of his workers. “You have to learn to slow down a little bit, you can’t hurry up too much.”

The work was five days a week, with weekends off when he would do odd jobs around the plantations and the workers could spend time in their own gardens where they grew vegetables. With fresh fruit like papaya, bananas and pineapple, it led to a simple but healthy diet.