“I am proud to be a brother. I do not want to be any other thing but a brother, for Jesus was a brother to humanity.”

Brother Pius Agyemang, SVD, says he was drawn to the brotherhood by a comment made early in his life, just as he was deciding his religious vocation. Shortly after arriving at the SVD novitiate at Adoagyiri-Nsawam, in his home country of Ghana, West Africa, he met the novice master, Fr. Lawrence Thornten, SVD.

“In the SVD, we have priests and we have brothers,” Fr. Lawrence said. Encouraging him to consider the brotherhood, he pointed out that St. Francis of Assisi was never a priest. He was a brother. He also said that Jesus was a priest for only three days—at the end, when he miraculously transformed bread and wine into his body and blood.

“Jesus was a brother for thirty-three years. He went about doing good, gathering people around him, twelve of them. All brothers,” Fr. Lawrence said. “They used their talents to evangelize and spread the Good News. They opened the eyes of people to know God.”

The priest said that a brother is like Jesus, using his talents to go about doing good. 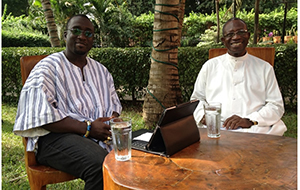 Since that conversation with Fr. Thornten in 1960, Bro. Pius, the longest serving Ghanaian SVD in Ghana, has held its message as the foundation of his religious vocation. He has since created a ministry based on his God-given talent for music, and the ability to connect with people. From composing hundreds of songs and dozens of Masses that are infused with African Culture, to expanding the understanding of the liturgy in parishes, to weekly radio and television broadcasts, and performing before dignitaries, including Pope John Paul II. Bro. Pius is truly “doing good” for God’s people.

Bro. Pius was born on September 3, 1944 in Kyekyewere, a village thirty-six miles from Kumasi in the Ashanti Region. His father was Catholic but his mother, a gifted traditional musician, followed a traditional religion. He did not get to know his faith until he was six, when an aunt, who was a devout Catholic and a member of the parish choir, frequently took him to Mass and encouraged him to sing.

The Catholic way of life was a mystery to many of his friends especially when it came to confession. How could anyone tell a priest their most personal secrets? But when he was twelve years old, a diocesan priest, an African, came to his village. It was a revelation because the priest gave him advice about his personal life in a way that he could understand. It was a different experience compared to the European priests because this man spoke in his language and had the same expressions. It was then that he decided to enter religious life.

Because Bro. Pius responded to God’s call to the brotherhood, the lives of thousands of people have been touched as God has been revealed to them through his music. If he had chosen the priesthood, with its many sacramental and pastoral duties, he would not have had the opportunity or time to fully explore his God-given talents for the service to the church and God’s people.

“Even though priesthood is so good, the Lord wants me to go around doing good with my talents and that is how it happened,” Bro. Pius said. “I am proud to be a brother. I do not want to be any other thing but a brother, for Jesus was a brother to humanity."