“The brother is able to go out and have a career outside of preaching the Gospel, they’re more the doers.”

Young Dan Holman decided on his vocation while attending Divine Word Seminary High School in Perrysburg, Ohio. He wanted to be a Divine Word Missionary brother.

“The brothers were the ones who were actively involved with us in school,” he said. “The brother is able to go out and have a career outside of preaching the Gospel, they’re more the doers.”

Today, Brother Dan Holman, SVD, puts his many skills to work at the Mission Office at Techny, where his creativity is revealed through graphic design, publications, websites, video productions and a host of other areas, all in the effort to raise funds for SVD missions in this country and abroad. Over his career, he has also been a teacher, formator, program director and served as the Superior Delegate for the three SVD provinces in North America.

“Becoming a brother has been a wonderful decision for me,” he said. “I’m able to do what I need to do to spread the Gospel, just in a different format.”

Born on April 8, 1960, in Fostoria, Ohio, he attended the minor seminary in Perrysburg, where he graduated in 1978 and then enrolled in Divine Word College, in Epworth, Iowa. He graduated in 1982 with a degree in Humanities and went on to Novitiate where he professed his First Vows in 1983. After novitiate, he got his first exposure to missionary life through what is now called to the Cross-cultural Training Program (CTP), which he spent at an African-American parish run by the SVD in Lafayette, Louisiana.

“I was 22, and decided, without any training outside of the academic Humanities, to work in parish ministry,” he said. “It was very interesting. I was very green.”

His ministries included youth groups, altar servers, youth choir, the CCD program and confirmation as well as other duties at the grade school. After three years, he transferred to an inner city parish in New Orleans where he worked part time while pursuing a Bachelor of Fine Arts (BFA) degree in graphic design at the University of New Orleans. But before he could complete the degree, he was assigned to Divine Word College to do design work for the Vocation Office, in 1988. 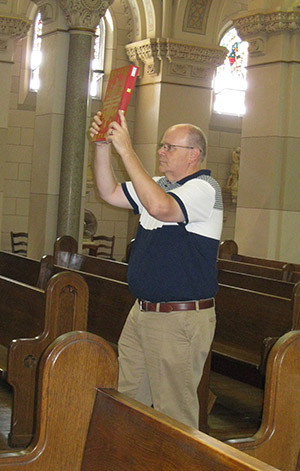 The next year, Bro. Dan left Divine Word to prepare for his Perpetual Vows, which he professed at his home parish in Fostoria, Ohio, on September 4, 1989. Returning to Divine Word, his skills were put to use as a formator as well as a teacher in graphic design and other art and humanities courses. Meanwhile, he enrolled in Clarke College in Dubuque to continue work on his BFA, which he completed in 1991. He was soon accepted at the University of Northern Iowa to pursue his Masters of Arts (MA).

“I completed the degree in a year and a half while commuting—I lived in the car,” he said. “The college was good enough to free me up from teaching during this time, but I continued to do formation work, was assistant chaplain, assistant dean of students and even did vocation work for a year.”

Completing his MA degree in 1993, Bro. Dan remained at Divine Word until 1999, when he was asked to take over the Brother Formation Program as director of Wendelin House, in Washington, D.C. In 2004, the program was moved to Chicago, and Bro. Dan followed, but went to work with the late-Bro. Dennis Newton in the Mission Office.

“For Dennis, my main thing was to do special projects that he was interested in,” he said. “I did a lot of book layout. For instance, he was involved in prison ministry, so we took drawings that prisoners made and I transferred them to the computer to make coloring books to tell stories.”

A year later, in 2005, Bro. Dan became Superior Delegate for the three North American Provinces, where he worked with missionaries who were going overseas or were coming to this country to study or were on home leave. It meant that he helped set up doctor’s appointments, made sure medical bills were paid, dealt with immigration issues, helped get them into schools, get settled in SVD communities or parishes, helped the newly ordained move on to their first assignments and a host of other duties.

“If an SVD was coming in for a workshop or just traveling through the country,” he said, “I knew about it.”

After that three-year assignment wrapped up in 2008, he returned to his former duties at the Mission Office to resume his graphic-design work, as well as some new ones related to websites and video production. He also resumed his work assisting Bro. Dennis with special projects, such as Divine Word Farms, which raise money for overseas missions.

“The work here for me is really about raising funds for our overseas missions,” he said. “It’s about ‘mission animation,’ which is telling our story, what our guys are doing, through media—magazines, appeals, videos and social media.”

His creative skills could have resulted in a profitable life in the secular world, but Bro. Dan’s desire to be a “doer” as a Divine Word Missionary brother has worked out quite well.

“I’m talking about who we are as missionaries,” he said. “It’s exciting for me because my work lives through others who are out there doing incredible things; we are all doing our part to spread the Word of God.” 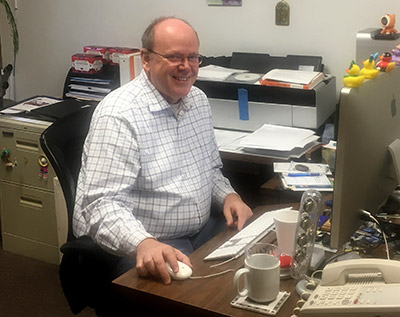