"If you bring Christ and Him Crucified to the public you will be blessed!"

In February 2010, Father Michael Manning, SVD led the Wordnet Productions staff in creating a short daily reflection/meditation App on the liturgy of the day for the iPhone and Android.It was named:iGOD TODAY.Since that time the total hits from the United States and around the world have risen to about 14,000 a month.Currently the grand total is close to a million.

In October 2016 the studio expanded its outreach with a Spanish App: DIOS HABLA.The kickoff episode was presented by Bishop Gerald R Barnes from the U.S. together with presenters from Panama and Colombia.Since inception this Spanish App has attracted over 11,000 hits.

We have fourteen English presenters and twelve Spanish presenters.Each presenter voluntarily writes and delivers his or her own reflection. The two Apps can be accessed from the App Store and Play Store respectively, as well as from Wordnet’s website: www.wordnet.tv.Starting March 1, 2017, and made possible by generous grants, these morning meditations air in high definition aligning them with today’s technology.

These initiatives are part of the legacy of Father Mike who led the way in many promising and potential uses of the media.His many interviews were successfully carried for years by Trinity Broadcasting (TBN), but now on the passing of TBN’s founder and its change of leadership and vision, this partnership has come to an end.However, this can be seen as fortuitous in so far as it has forced us to take a new look at the industry, assess our role in it and move forward in new directions.Wordnet has already been making productive use of Facebook and YouTube in sharing the weekly shows as well as the daily English and Spanish meditations. 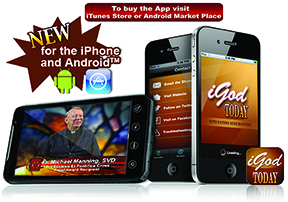 Moving forward, Father Mike and his staff decided to: “Launch out into the deep” (Lk 5:4) and made plans for creating new use of the internet with a web streaming channel of our own creation. This new channel will enable Wordnet to air programs produced by Divine Word Missionary communication centers around the world as well as those of other religious orders.The idea is to enlist additional hosts for interviewing and produce shows on topics presented by professionals in their respective fields, such as bible, marriage counseling, youth, etc.

Father Mike was eager to promote this.One of his concerns was that people thought he and Wordnet Productions was one and the same.The studio, Fr. Mike pointed out, was bigger than he alone and should be seen as such.The studio should be producing programs that include other people with their own specialty.For various reasons Wordnet was not able to do that due to contractual obligations but now, with the possibilities available to us in the media today, the studio has the opportunity of sharing the Word of God in unique and powerful ways.That being the case, steps are being taken to begin preparing new programs and launching them later this year. 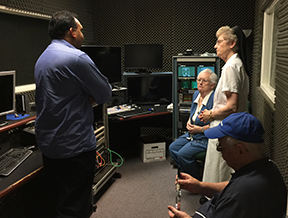 One way or the other, Father Mike, who died earlier this year, continues to lead us in carrying on this ministry.Across the hall from this office hangs a framed letter to Father Mike from Bishop Fulton Sheen in August 1978.In closing, the Bishop wished him “...every success.If you bring Christ and Him Crucified to the public you will be blessed!”And so it was.Father Mike’s outreach was to hundreds of thousands at least and to all corners of the world.Father did his job in carrying us this far.Now it is up to us to continue that which was so successfully started!