The Founder of the Divine Word Missionaries was a teacher, and always ensured that education was a part of the Society’s mission. Today, as part of its ministry in tertiary level education, the congregation runs Divine Word University (DWU) in Papua New Guinea.  With some 4,000 students on five campuses throughout the country, DWU aspires to be a National University, open to all, serving society through its quality of research, teaching, learning and community service in a Christian environment. I serve as University President.

The Divine Word University approach to education is 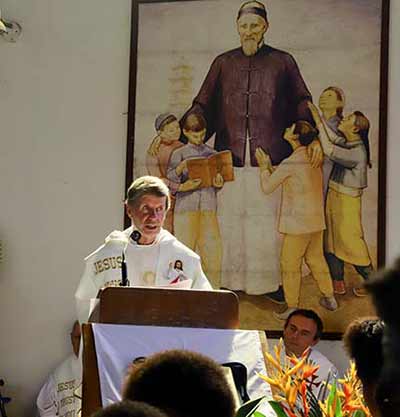 enshrined in the 1977 Divine Word Institute Charter which crafts a vision of an academic community in search of truth, with a religiously oriented and socially conscious environment as the setting for the learning experience. The mission of the University is exercised through four faculties: Arts and Social Sciences, Education, Business Studies and Informatics, and Medicine and Health Sciences.  This year the university graduated its first class of medical doctors.

I was born and grew up in New Zealand and come from a Catholic family with four siblings and an uncle who was a priest with the Society of Mary (SM).  On leaving high school, I thought about serving the church as a priest and went to a diocesan seminary.  However, I became disturbed learning about sociocultural and justice issues in developing countries and began to consider a missionary vocation.  The Divine Word Missionaries were not working in New Zealand at the time, but I learned about the SVD in a booklet featuring Bishop Arkfeld, the American, so-called "flying bishop" serving in New Guinea.  I travelled to Australia to enter novitiate there and later to do post-graduate studies in Anthropology at Sydney University.

At the end of 1974, I travelled to USA and began theological studies at Catholic Theological Union in Chicago.  I admit I found it a challenge moving from New Guinea to a very different environment in Chicago.  However, it turned out well and in 1978 I graduated from CTU with an M.Div and MA in Theology.  During the summer breaks I studied linguistics 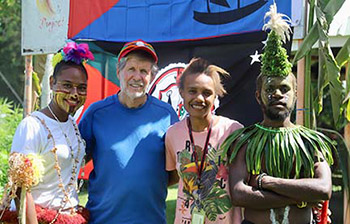 with the Summer Institute of Linguistics in North Dakota and Oklahoma. For pastoral work I served at Mercy Hospital, assigned as an assistant chaplain in the quad/paraplegic section. At first the nurses seemed suspicious of the new arrival and I found it hard to talk to the patients, many of whom found it difficult to understand my New Zealand accent. However, a breakthrough came when one evening I lay on the floor for an hour under a quadriplegic patient who was suspended face down in a special frame. It seems the sharing really helped the patient, and the nurses noticed this and I felt well accepted after that.

I was ordained a priest in November 1978 and the following year returned to Papua New Guinea to serve in a very isolated parish in the PNG Highlands.  There were few roads and pastoral work involved weeks of walking on rough tracks in the forested mountains. Being young and fit, I found it to my liking.

After ten years "in the bush" the SVD asked me to go for doctoral studies and I spent five years studying for a Licentiate and then a Doctorate in Fundamental Theology at the Gregorian University in Rome. My thesis on Divine Revelation and Liberation Theology, focused on the work of three theologians: from Peru, Sri Lanka and Cameroon.

I returned to Papua New Guinea in 1996 and served four years teaching at the National Seminary, then four years on 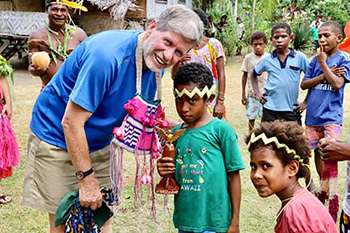 the faculty of the Melanesian Institute - a research centre for Cultural and Pastoral issues.  When HIV and AIDS started to become an issue in PNG, I worked in PNG as research advisor for Caritas Australia.  Later I served as Secretary to the Commission for Social Concerns of the Catholic Bishops Conference of PNG and Solomon Islands.  In all these various ministries, I found time for pastoral work and interests such as film-making.  Gender based violence and particularly torture and killing of suspected "witches" has been recognised as a very real issue in PNG and over the past ten years I have been heavily involved in efforts to meet the challenge of Sorcery accusation related violence.  In 2018 I was awarded the OBE (Order of the British Empire) medal by the Queen of England, for services to the Enga people and the Church in PNG.

Divine Word Missionaries in PNG now have a number of local Papua New Guinean vocations, some of whom serve at home in PNG, while others are missioned to various countries around the world, including USA.  I like to promote a sense of vocation, both that of the missionary religious calling, but also the call to mission of lay persons, serving their country and their community as committed Christians. Near the end of every year at Divine Word University, students in their fourth and final year attend a "missioning" ceremony in which they receive a cross and commit themselves to promoting the values that have become part of their lives during their time at DWU.