Dividing the sixteen seminarians into two groups—high school age and college age—they met every day. Together, they experienced the first vestiges of DWC’s budding ESL program, which had at its core the incremental teaching of the four basic language skills: listening, speaking, reading and writing.

Bro. Pat Hogan, SVD, lived his dream of working in the foreign missions, but in 1975 he was the right man at the right time in the right place for Divine Word College in Epworth, Iowa.

Experienced in teaching English to Chinese students and educated in linguistics, Bro. Pat created a program at DWC to teach English to a group of Vietnamese-refugee seminarians after the fall of Saigon. The English as Second Language (ESL) program he established continues to attract non-English-speaking SVD candidates and other students, which has played a major role in fortifying the college’s enrollment.

Born in Philadelphia, August 2, 1936, he entered the SVD Brother Candidates School at Conesus, New York, in 1951. Professing his First Vows on Aug. 2, 1957, he was assigned to the Far East in 1962. His first stop was Japan to learn and gain working experience in the Finance Office at Nanzan University. He then put this training to work in Taiwan where the SVD was building and establishing Fu Jen University.

After professing his Perpetual Vows in 1963, he spent the next six years in the university’s Finance Office, as treasurer, returning to the U.S. in 1969 to complete his undergraduate education at Seton Hall University where he received the University Medal for Asian Studies. He went back to Taiwan to teach English to Chinese students but returned to the U.S. in 1973 for graduate school at Georgetown University. He earned a master’s degree in Linguistics in the spring of 1975, and was headed back to Taiwan when then-DWC President Fr. Louis J. Luzbetak, SVD, asked if he would come to Epworth to teach courses in Asian Studies and Linguistics.

It proved to be a pivotal request.

Earlier that year, on April 30, 1975, Saigon fell to the Communists and many Vietnamese fled their country. A group of Catholic seminarians made their way to Thailand, and then were airlifted to Fort Chaffee, Arkansas, hoping to find a new life in the United States. The SVD found out about the refugees and welcomed sixteen high-school and college-age seminarians at DWC in October. Some knew a few English phrases but none were well versed in the language.

With his background in teaching English to Chinese students, his knowledge of the Far East and his academic foundation in linguistics, Bro. Pat was asked to create a program to teach English to the young Vietnamese.

At the time, Bro. Pat was teaching a course in linguistics, which enables a person to learn a new language by becoming familiar with its sound system, phonetics, semantics and grammar. Equipped with the ESL textbooks he used in Taiwan, Bro. Pat then recruited his four best students from his linguistics class to assist him as apprentice teachers. 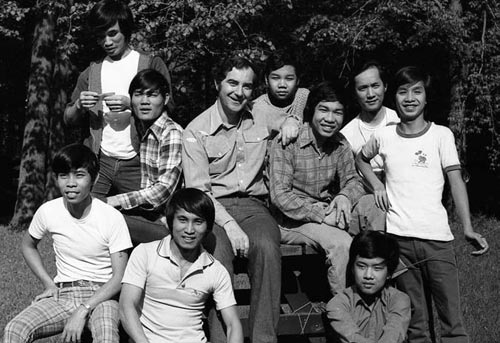 “One of them was Mark Weber, who later became Provincial (now General Secretary for Formation and Education for the Society of the Divine Word) and one of the others was Tom Ascheman, our current Provincial,” he said. “So we had top young teachers.”

Dividing the sixteen seminarians into two groups—high school age and college age—they met every day. Together, they experienced the first vestiges of DWC’s budding ESL program, which had at its core the incremental teaching of the four basic language skills: listening, speaking, reading and writing. First, the seminarians needed to distinguish sounds, so they began with basic phonics.

“For instance, they couldn’t differentiate between ‘je’ and ‘ch’, so they would say ‘judge’ instead of ‘church’”, Bro. Pat explained. “So, I studied the Vietnamese sound system and though I didn’t speak Vietnamese, I could compare it with our sound system and identified the sounds they would have the most trouble with.”

To distinguish sounds, the first few weeks were dedicated to listening, and then they moved to speaking—conversational skills—and then reading and then writing. Eventually, all four elements were integrated.

Outside of the classes, DWC became a true “immersion” program. In 1975, the vast majority of the approximately 110 regular students were English-speaking Anglo Americans, providing ample opportunities for the Vietnamese to practice their English.

“Our students got to know the Vietnamese students very well,” Bro. Pat said. “They would take them home for recesses, like during Thanksgiving and Christmas."

After a year, the Vietnamese students took the Test of English as a Foreign Language (TOEFL). Those who wished to continue their studies at DWC were advised to take courses that did not involve a great deal of vocabulary that would be tough to grasp, such as in philosophy courses. At first they took classes in mathematics, art and music, progressing to more complex courses as they went along.

After the first year, Bro. Pat continued the ESL program by offering it to lay students outside the college. But within a year, the continued flow of Vietnamese refugees—the so-called “boat people”— increased the flow of young men interested in joining the SVD, and DWC had an English-learning program to help them do it.

Bro. Pat left DWC in 1983 to return to Fu Jen University in Taiwan, where he published two ESL textbooks for Chinese students, taught ESL courses and a graduate course in Language Methodology until 1999, when the Chicago Province invited him to return to Chicago to be director of Techny Towers International Conference Center. In 2004, he went to the SVD House in Bordentown, New Jersey, where he would serve as rector and returned to Techny, in March, 2015.

Since the 1970s, the enrollment at DWC has evolved from one dominated by English-speaking Americans to one that boasts students from more than twenty countries, especially Vietnam. There can be little doubt that the ESL program created by Bro. Pat has had a critical role in that transition. He was indeed the right man, at the right time in the right place for DWC.