“I received $8131.05 from the rector and the Epworth community,” said Fr. Lan Tu Luong, SVD, a 2004 graduate of DWC, who is on mission in Bahia Negra with two other Divine Word missionaries. “We will use this gift to serve and feed the hungry children in giving witness of the Risen Lord among the poor and marginalized.”

It all began more than a year ago, when Divine Word Missionaries at DWC decided they wanted to go beyond their work preparing future missionaries for the church. Fr. Thang Hoang, rector of the college SVD community, said they wanted to help the poor more directly by going “ad extra”, which means “to the outside.”

Last September, they held a four-day garage sale with donated clothes and other items from the college community as well as many items that had long been stored in the lower levels of DWC. The goal was to raise $4,000 to $5,000 to support a soup kitchen the Divine Word Missionaries were running in Bahia Negra, which served a nourishing meal to 150 children every Sunday. The garage sale surpassed its goal and combined with additional donations from a second fundraiser, the check sent far exceeded expectations. 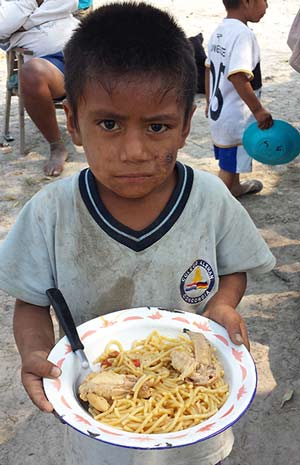 “We are very grateful for the help and support from our benefactors, in particular the Divine Word College community,” said Fr. Lan. “Your generosity has helped and encouraged me to serve more faithfully and abundantly.”

The impoverished people of Bahia Negra are predominantly Chamacocos, indigenous people who can trace their lineage to the land back five centuries. Facing discrimination by government authorities, their lands were taken away and sold to the wealthy, who now prevent them from hunting and fishing there. Today, the Chamacocos are considered the poorest of the poor in that country.

“We have used the funds to help such as building homes, provide clothing, and many other projects, besides the soup kitchen where we can serve the children as well as the elderly every Sunday,” Fr. Lan said. “We thank God for the generosity of our benefactors who have helped us to serve the poor and the needy at this remote region.” 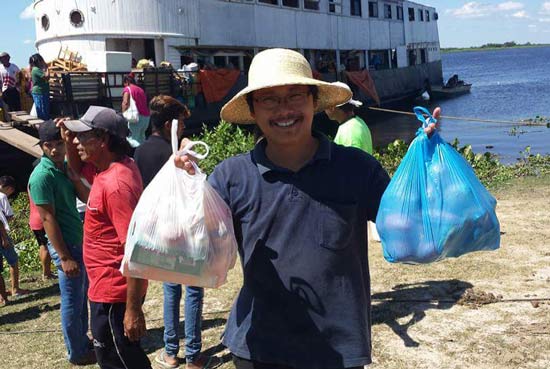