Getting the Hint: God’s Little Clues to His Call

Sometimes God’s call to religious life may come as a whisper. Sometimes in a profound revelation. And sometimes, it may come as a string of clues pointing to a vocation. That was the case for Martin Hererra.

“There were these little hints and, looking back, I avoided them with a passion,” he said. “I didn’t want to hear them, I would just run away.”

Born in a Salvation Army hospital in 1982, Martin’s parents arrived in Chicago years earlier from Mexico and worked to save enough to buy an apartment building in a tough neighborhood. He did not learn English until the 8th grade, but went on to graduate high school with honors and entered college. Working part-time in an office supply store while pursuing a degree, in 2001 he ran out of money and had to drop out. He then went to work full time and worked his way into management.

Growing up, his parents were dedicated to Sunday Mass. As a little boy, the sound of the bells and the beauty of the stained glass were perhaps God’s first hints to religious life. 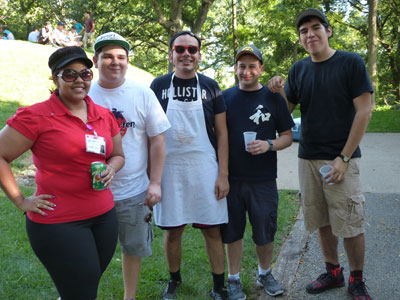 “I liked going to Mass because it had something that called me,” he said. “It calmed me and attracted me.”

During high school, he volunteered at the parish, which became his ministry for 16 years, spending evening and summers doing what had to be done—from cleaning the church to helping in the office and assisting with Catechism and the choir.

“People would ask if I lived in the rectory,” he said. “They said I looked like a seminarian.”

The hints at religious vocation continued—comments from people and curious occurrences— until one Sunday at his parish, he met a visiting deacon who worked at Techny. Seeing his devotion, the deacon passed his name to Fr. Adam MacDonald, an SVD vocation director, who invited Martin to Techny.

“Everyone was so kind, so humble,” he said of his visit. “That was what attracted me to the SVD.”

Fr. Adam invited him to visit Divine Word College, but with a job, an apartment and being close to his family and parish, did he really want religious life? He finally decided to make the trip in 2013, but he also asked God for a sign.

“Three days before I was going to Epworth, the company, which was merging with another store chain, basically told me my job was eliminated,” he said. “So, I had my sign.”