The World is a Classroom

Back home in the Philippines, when I was younger and more adventurous, I remember a poster on the church bulletin board: “Want to see the world? Be a Divine Word Missionary!” Coming from a family of five brothers in the seafaring industry and being the youngest, I envied their experiences, their stories, and their photographs of Europe, the Americas, Australia, and Asia. I never realized that this desire to see the world without becoming a seaman was God’s way of bringing me to Divine Word Missionaries.

Fast forward past sixteen years in formation to the time before my ordination on December 6, 2008. Our formator asked us to write down our three choices for our first mission assignments after ordination. There is an unwritten rule in the Philippines that the farther one is assigned, the more exciting the missionary experience would be. I was just a pen away from my dream of seeing the world and going as far as possible! My three choices for my mission assignment were: 1. Mexico (The farther the better); 2. Japan (The more difficult the language, the more exciting); and 3. Australia/New Zealand (It is an isolated continent, so it would be good to do mission work where the number of cows is greater than the number of people).

After spending a long time in prayer, I handed my letter to my formator. The next day, he called me in and asked me: “Aris, are you not considering the Philippines?” Spontaneously, I said, “NO, Father.” Then he continued, “Have you considered working in the Philippines during your prayer?” I was reduced to silence. Then after more time of thought and prayer, I dropped Australia and put in the Philippines as my third and last choice. I clung to the belief that God knew my heart’s desire. My letter and those of my classmates were forwarded to the Generalate in Rome. 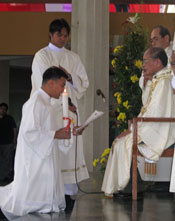 Finally, the time came for our first assignments to be announced. This is a big event in the community. We all gathered together, and the rector read the letter from Rome with our first mission assignments: Frater 1, missionary to Argentina. Frater 2, missionary to the mountain provinces of the Northern Philippines. Frater 3, missionary to the Southern Philippines where Muslims are the majority. Frater 4, missionary to the central Philippines on an island where malaria prevalent. Frater Aris . . . ” Then I waited. In silence, I prayed one more time, “My God, this is the chance to see the world. Please make my dream real.” The rector continued, “Frater Aris, missionary to the Philippine Central Province from Divine Word Seminary, Tagaytay City, to Christ the King Mission Seminary in Manila.” The distance was a little more than sixty miles away, and I was going from one seminary to another seminary. I sighed, “Lord, you must be joking. Where is the world?”

A year later, I went to Rome for further theological studies. Then, I went back to the seminary in the Philippines. By then, I was frustrated and had stopped dreaming of the world. I just accepted my fate that I was not “export quality.” I was only good for local consumption, as the saying goes. Just when my dreams were not desired anymore and my prayers were no longer uttered, I had an opportunity to teach at Divine Word College in Epworth, Iowa. Without much excitement about being in a seminary setting again, I said yes. Why not? I was a master of seminary life. I have been in it for almost more than half of my life, from rising in the morning to lights out at night. As my teacher in the seminary used to say, the only difference is the same!

I was asked to teach two theology subjects. One subject I was already teaching in the Philippines, but the other I would teach for the first time. It was called Non-Christian Religions. The title is negative, non-Christian. How can I teach who I am not? But my supervisor encouraged me to take the challenge. So, I took the challenge, believing that perhaps deepening my knowledge of non-Christian religions can better my being a Christian. This inspiration came instantly, like Hans Küng’s spontaneous response Why I am Still a Christian to Bertrand Russell’s Why I Am Not Christian. 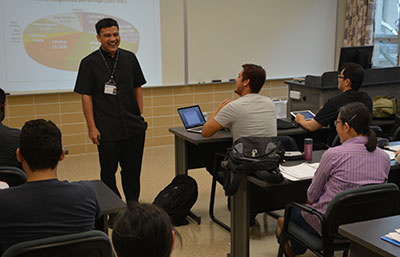 I asked my students to introduce themselves. The first was John, a Korean-American; then Tess and Pho, both Vietnamese; and then Wil, from Haiti; Bri, a German-American; Pao, a Chinese nun; Gio and Man, both American-born of Mexican parents; and Vuo, also Vietnamese. All of them were different, yet we were in the same classroom. Each spoke a language other than English. All of us were Christians, but were willing to learn about non-Christians. Awed with differences coming together and enriching one another, I introduced myself: “I am Father Aris Martin from the Philippines. I am a Divine Word Missionary. The world is our parish. The world is our home.” 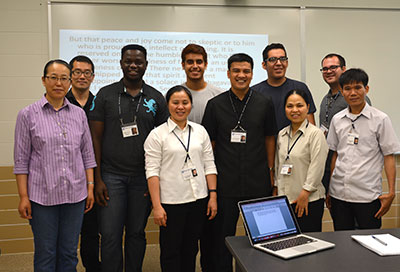 Then I began to feel the whole world compress in that classroom, a common home for people who are different. Standing before those seminarians, sisters, and brothers after my introduction, I was brought back to that poster of a Divine Word Missionary inviting me to be one so I can see the world. This is the world here and now in this classroom. Here at Divine Word College in Epworth, Iowa, in this small classroom number 208, words on posters are prophetic, dreams are made real, the unknown is not feared, and differences are not discouraged. In fact, the non-, the unknown, the different, and the other are celebrated. It is a welcoming world. Better yet, it is a piece of heaven on earth.

Before the first class ended that day, I noticed that there were still three empty chairs. Is it possible that you, the one reading my article, or somebody else you might know, can fill the three empty chairs? Please spread the news, “Come and see.” You might fit in the chair. There is not much of a requirement. Just be yourself and welcome others as they are. Then, when the three empty chairs are filled and roster of the twelve students is complete, I can silently move out from this classroom filled with joy and give way to the teacher par excellence, the Divine Word Incarnate. Who knows? I may be welcomed to another room to teach, perhaps in your college or perhaps in your parish. I do not know. What I know now is that the world is a classroom.

Aris Martin SVD is originally from Solsona, Philippines. He professed first vows in 2004 and was ordained a priest in 2008. Father Aris holds a licentiate in dogmatic theology from the Pontifical Gregorian University in Rome, Italy. In the Philippines, he taught courses in philosophy and theology at Christ the King Mission Seminary, Quezon City, Divine Word Seminary, Tagaytay City, and Ateneo de Manila University, Quezon City. Fr. Aris is the newest addition to the faculty of the Department of Theology and Philosophy at Divine Word College in Epworth, Iowa, where he teaches non-Christian religions and creation and eschatology.